Happy St. Patrick's Day: What It's All About and the Significance of Green 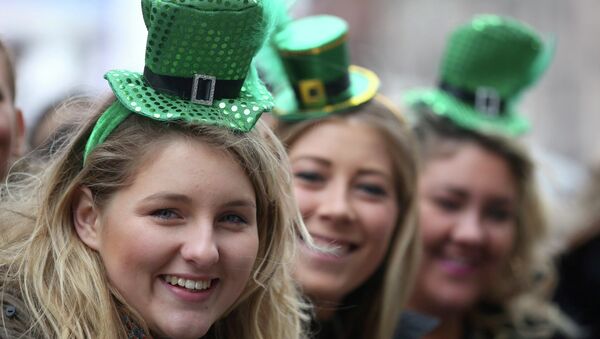 © REUTERS
Subscribe
March 17th marks Saint Patrick's Day, an Irish holiday celebrated all over the world and green is its traditional color.

Sputnik spoke about the Irish traditions surrounding the Catholic feast and the ways it is celebrated today with Breffny Morgan, an Irish resident of Moscow and employee at the Skolkovo Innovation Center.

Sputnik: Can you tell us about the history of St. Patrick's Day and why is it that we're all drinking green beer and wearing green?

Breffny Morgan: Every March 17th Irish people around the world become ambassadors of Irish culture because we're lucky that everybody celebrates our unique national feast day.

The green comes from the shamrock, it's our national plant. The three leaf clover is actually the symbol, it was used by St. Patrick the patron Saint of Ireland who introduced Catholicism to Ireland, and he wanted to find a way to explain that there was three Gods in one, the Father, the Son and the Holy Spirit, and he plucked a shamrock from the soil and it has three leaves connected in one stem.

Sputnik: It is actually a religious celebration, it is a feast day in the Catholic Church to celebrate the patron Saint of Ireland, who is St. Patrick and it's the day of his death I believe?

Breffny Morgan: It's the day of his death, yes, the date is disputed, the date of his arrival to Ireland is 432, so this is when Ireland became quite Catholic and during the Middle Ages we became the land of saints and scholars, it was a very academic style place with lots of monasteries.

Sputnik: Wasn't he actually kidnapped and brought to Ireland?

Breffny Morgan: He was Welsh by origin, in all of this story and folklore of St. Patrick the migration theme was at the very beginning, so he came from Wales, went back to Wales and went back to Ireland, and the reason St. Patrick's Day is international is because we have so many emigrants, waves and waves left for the Americas and Australia, New Zealand, all parts of the world and England too, loads went to England, but we have such a diaspora that every March 17 we tend to get homesick and celebrate.

St. Patrick's Day falls in the middle of the Easter Lenten season, but because it's a feast day it's an exception, so you have a couple of weeks of abstinence, punctuated by this one opportunity to have a bit of a break and the next day go back to your Lent.

For more information listen to this edition of Weekend Special with Breffny Morgan.

The views and opinions expressed by Breffny Morgan are those of the speaker and do not necessarily reflect those of Sputnik.