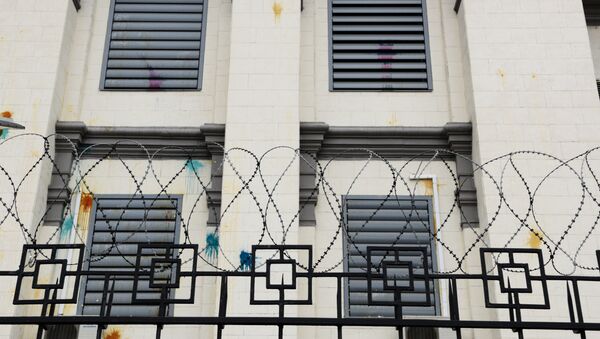 The Russian Foreign Ministry has reacted to Ukraine's decision to prohibit Russian citizens from voting in the Russian embassy and Consulate General in Ukraine on March 18.

Ukraine's decision to prohibit Russian citizens from voting in the Russian embassy and Consulate General in Ukraine on March 18 contradicts international human rights norms and does not fit in the definition of a civilized state, the Russian Foreign Ministry said in a statement on Friday.

"The decision of the Ukrainian authorities released on March 16 to prohibit the citizens of the Russian Federation from attending the Embassy and the Consulate General on the day of the Russian presidential vote causes nothing but outrage. Such actions are unprecedented and do not fit in the conventional definition of a civilized country," the statement said.

The ministry specified that Kiev's step contradicted international conventions and agreements, including the Vienna Convention on Diplomatic Relations and the Convention for the Protection of Human Rights and Fundamental Freedoms of 1950.

"It is an obvious attempt to interfere in the internal affairs of the Russian Federation, which leads to the escalation of tensions in the bilateral relations, which are already strained," the statement said.

Commenting on the ban, Russia's envoy to OSCE Alexander Lukashevich told Sputnik on Friday that Kiev should fulfill its obligations under in the international humanitarian law and allow Russian citizens to vote in March 18 presidential elections.

"We appeal to the fact that all obligations must be fulfilled in full and people should be given the right [to participate in elections]," Lukashevich said in a phone call.

The diplomat added that the Russian mission to the OSCE will draw the attention of the organization and the participating countries to what is happening in Ukraine.

"We will use all channels, of course, this is a very alarming signal on the eve of our elections," Lukashevich stressed.

Earlier in the day, Ukraine's Interior Ministry said in a statement that it would not allow Russian citizens to visit Russian diplomatic missions on the territory of the country to vote in March 18 presidential election.

According to the statement, "only individuals with diplomatic status will have access to the missions. Other persons and citizens of the Russian Federation will not be permitted to enter the territory of diplomatic missions on this day [March 18]."

The document also says Ukrainian police and units of the National Guard will ensure the security of Russian diplomatic missions on election day in Russia.