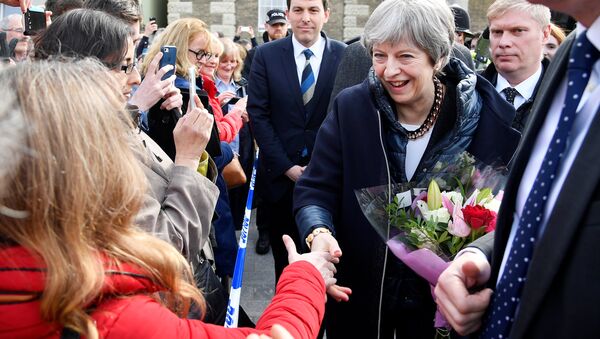 As the diplomatic tensions between Russia and the United Kingdom have heightened, UK Prime Minister Theresa May visited Salisbury after what she described as the alleged “brazen” nerve agent attack on former Russian spy Sergei Skripal and his daughter.

While the scene of the poisoning was considered highly toxic and dangerous by law enforcement officials due to the qualities of the alleged Novichok nerve agent, Theresa May didn’t appear to fear turning up without any protective clothes, which social media users could not help but notice, calling the current circumstances surrounding the incident a “phony and hoax show.”

without a hazmat suit? very brave. unless of course it's all a phony fake hoax show, again?

Other users supported the stance, with many saying that they were surprised she did not play drama:

I am surprised she didn't roll on the floor coughing and sputtering! Over playing the dramatics aren't we against those naughty Russians?

Interesting point. She wasn't even wearing any protective clothing.

Despite Moscow’s denial of any involvement in the poisoning, the UK prime minister reiterated her claims that she was holding Russia “culpable” of attempted murder without providing evidence and samples of the substance in question.

Prime Minister Theresa May visited Salisbury today to thank the emergency services, doctors, nurses, and investigation teams who have led the response to the attack on 4 March 2018. pic.twitter.com/dCIZ9R5R7n

Where is your evidence that Russia is to blame,for all we know this could have been complete set up by UK government to enable you to bring more policies out. I do not believe russia is to blame. Why would majority of UK people believe such a corrupt government.

It appears that she has very few supporters among Brits, who are left with no choice but to take to Twitter to voice their outrage with May’s policies.

Many believe that her actions may start the third World War with this “staged incident,” highlighting how absurd the “attempted assassination” is…

sharia may trying to land us in WW3 with this staged incident. pic.twitter.com/jLFvofannd

Now I’m going to take us into another illegal war because I say so…. seems legit

…and reminded people of Britain’s past mistakes:

The attack lol…. people’s memories are rather poor. Everyone forgotten the WMD Iraq had? The destruction we have caused in Syria? Fighting Russia via proxy! Jesus Christ people!!!!

NO EVIDENCE!! FALSEFLAG!! Do you get all of your information from Tony Blair remember the Iraq War remember the weapons of mass destruction remember all the lies

There were those who said that she turned a blind eye to internal problems and focused on Russia instead:

You spent 6 minutes in Grenfell then cowardly ran away from the poor people who had lost everything. 72 people dead, you have abandoned them.

A bit convenient that this all plays out in the week that Russian donations to the Conservative Party were revealed.

Users addressed May, asking whether she is going to visit Telford to meet victims of the pedophile rings:

She should be visiting Telford Not Salisbury. It would appear that 2 Russian Dissidents Who have been poisoned are more important than 100s of Children
being abused by The Religion of peace. We mustn't forget she is very inthusiastic
about The Growth of Islam enemy in the UK.

Are you off to Telford as well? Have you ever met any of the victims of grooming gang's?

And now to Telford as surely 1000 girls being raped, tortured & abused are more important to majority of Brits than some second rate James Bond story. Telford, Rotherham, Rochdale, where next? The dominos of silence & cover ups are slowly being toppled.

During her visit to Salisbury, Theresa May said that the risk to public health was low and that it was “great to meet some tourists” still enjoying the city. It didn’t take social media users long to respond.

C'mon, surely she's been in the job long enough to recognise #oldmedia hacks when she sees them…

Yes I'm sure this is to reassure visitors and residents of the city. They never were in any danger anyway.

On March 4, Sergei Skripal and his daughter Yulia were found unconscious after being exposed to a chemical substance that the UK police identified as a military-grade nerve agent Novichok, allegedly developed in Russia. The UK authorities are accusing Moscow of “attempted murder,” although declined Russia’s request to provide samples of the substance in question.

As a response to the alleged attack, Theresa May announced the largest expulsion of Russian diplomats from the country since the Cold War. Moscow, for its part, is going to take reciprocal measures and expel British diplomats from Russia “soon.”