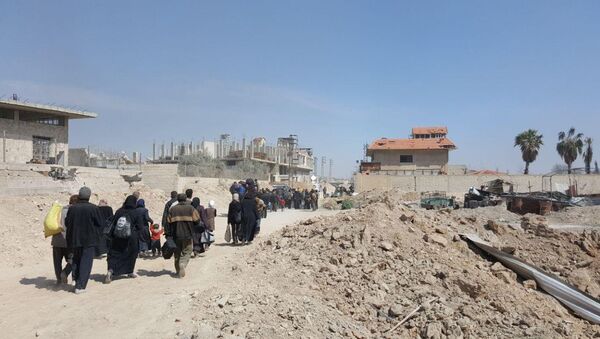 The operation was carried out after Syrian intelligence received information on the transfer of a large batch of weapons, ammunition and equipment for armed groups in the region.

"We organized an ambush, as a result of which a large truck carrying ammunition and weapons has been intercepted; some of the equipment is made in America. Also there were medicines and equipment for satellite communication there. All this was intended for militants in Ghouta," the spokesman said.

A video that appeared online shows ammunition and weapons found in the truck, including smoke grenades with the inscription "Salisbury England."

According to the officer, it is not the first time that the Syrian army manages to intercept a cargo intended for the militants.

A few days earlier, Syrian forces intercepted a car that was carrying ammunition, mortar shells, guns and missiles to the region.

The success of the operation will be a serious blow for the terrorists and will contribute to the weakening of armed groups in Eastern Ghouta, the spokesman concluded.