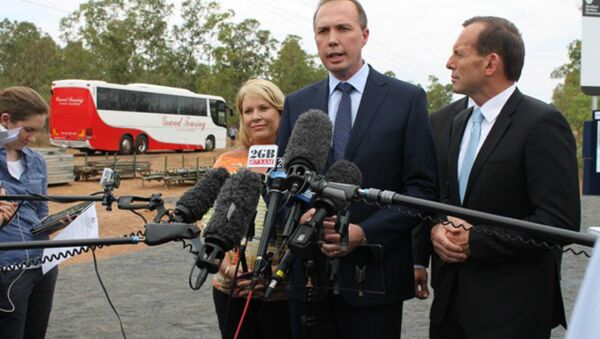 Dutton explained to the Daily Telegraph that the farmers "deserve special attention" due to their "horrific circumstances" facing land seizures and violence.

The 47-year-old's comments follow South African President Cyril Ramaphosa's statement that he would "escalate the pace" of redistributing land from wealthy white farmers who benefited from apartheid to poorer black ones.

Dr. Gerald Horne, a professor of history at the University of Houston and author of "From the Barrel of a Gun: The United States and the War against Zimbabwe 1965-1980," told Radio Sputnik's Loud & Clear that the new policy is consistent with past racist, destabilizing moves from Canberra.

​Horne told hosts Brian Becker and John Kiriakou that until 1967, Canberra pursued a so-called "White Australia" policy, in which it heavily restricted the terms of entrance for people from Asia as well as neighboring Pacific islands, preferring what was popularly called in the British Empire "pure European descent."

"[Dutton's] policy just enunciated… is a throwback to that discredited policy, but not only that, it could [also] be considered a gross interference in the internal affairs of a sovereign state… because it gives these farmers a certain kind of leverage when it comes to negotiating with Pretoria.," Horne continued.

By Any Means Necessary
What South Africa Will Be Post-Zuma; The Economics of 'Black Panther'

"Keep in mind that these farmers got these lands through means mostly foul and to this very day the European population is less than 10 percent of South Africa's population, but they control over 70 plus percent of the land… one of the reasons why the African National Congress has faced so many issues is because of the perception that this particular party in government has been slow in redistributing the wealth, which was obviously skewed after decades of apartheid policy," he continued.

"Now that the government is trying to move in the direction of redistribution, Australia sticks its nose into South African business and seeks to give these farmers leverage… it's ridiculous."

"This outrage by Australia also should cast new light on what's taking place in Zimbabwe," the author told Becker. "The government did try to move to redistribute the lands from a European minority [but it] found itself under punishing sanctions, including sanctions by Australia, which plunged the economy into the ditch, helping to produce world-class inflation."

According to Horne, the emergency visa initiative "is consistent with the policies of neo-fascists."

"In the latter part the of the 19th century, Australia had begun to engage in a kind of slave trade involving Melanesians and Polynesians… and what happened is that after these folks were brought to Queensland in Australia, the decision was made to move towards that ‘White Australia' policy of 1901," he explained. "At the time they said they were doing that because they felt that integrated societies do not work and they pointed across the Pacific Ocean at the United States of America."