It Was a Close Call: Putin Reveals How He Almost Became a Taxi Driver 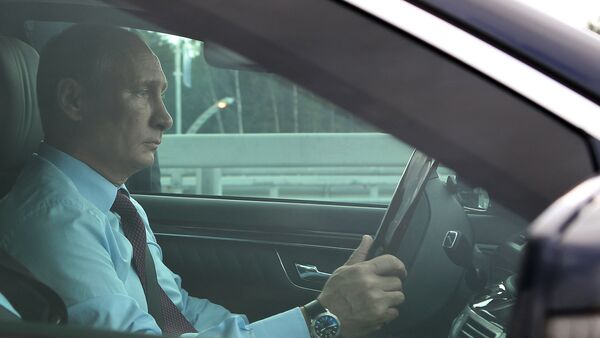 © Sputnik / Michael Klimentyev
/
Go to the photo bank
Subscribe
In a new documentary filmed by journalist Andrey Kondrashov, the politician shared the story of how he struggled to find a job in the 1990s.

Russian President Vladimir Putin said he was just about ready to become a taxi driver before moving to Moscow in 1996.

The documentary, in which the politician made his confession, appeared on the Vkontakte social network on Thursday, March 15.

Putin, who at that time was working in the team of then St. Petersburg Mayor Anatoly Sobchak, revealed that he decided to leave his home city after Sobchak suffered defeat in the gubernatorial election.

READ MORE: Putin Reveals How His Helicopter Came Under Fire in Chechnya

"What could I do? There was actually no place where I could work. To be honest, I was even thinking about working as a taxi driver. No kidding, seriously. Well, what was I supposed to do?" Putin said.

The politician then added that he was offered a position in the legal department at the President's Office. At that time, the Russian President was Boris Yeltsin.

"Of course, I agreed and came [to Moscow]," the politician said, but confessed that St. Petersburg will forever remain his home city. "I didn't want to move anywhere, but it just happened," he added.

READ MORE: Putin Reveals What He Might Do After His Presidency

In early February, while inspecting new machinery at the Rostselmash combine plant in Rostov-on-Don, Russian President Vladimir Putin made a joke saying that he might work as a combine operator after the end of his presidency.

000000
Popular comments
thank god he didn't, i like him as the president