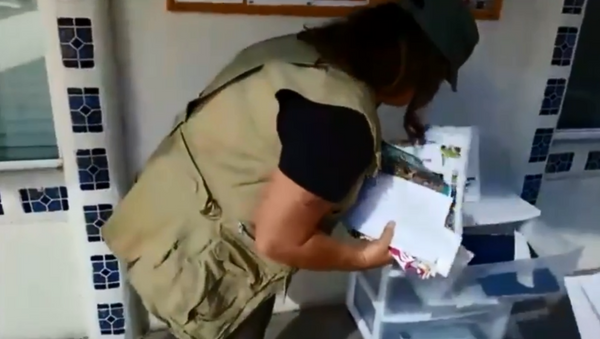 © Screenshot/Naui Ocelotl
Subscribe
International
India
Africa
Arizona's Tempe Police Department announced this week they are investigating the March 4 incident in which two women took their children to a Tempe mosque to steal "propaganda" materials in their attempt to "expose the evil" of the religion.

According to the department, the two women could face trespassing charges after their Facebook Live streams showed them taking flyers from the mosque and mocking the Muslim faith.

"At this point, it is an active case and our detectives are investigating the incident," Detective Lily Duran, a department spokesperson, told Arizona Central.

Identified as Tahnee Gonzales and Liz Dauenhauer, the two women are seen in several videos posted to Facebook talking about Islam and how it's ruining the US. In two videos recorded before their arrival at the Tempe mosque, Gonzales is heard asking one of the children about their thoughts on sharia.

"I think eff it," the child says before being asked to further explain. "At my age, the old men are allowed to marry young kids at my age."

Gonzales responds to the child's remarks by saying, "keep your children informed and aware so they don't get sucked into the evils that lurk around in our backyards."

Once they arrive at the mosque, their comments continue along the same lines as those heard in previous videos.

"It's out of control… the illegal invasion of Muslims," Gonzales says while taking a look at the stores next to the mosque. "Halal meats, here in America they use our own constitution against us if they feel we have threatened or mistreated them."

Entering the mosque, one of the kids says "they smell like goats," as the women begin to sift through pamphlets offered on stands.

"This is the infiltration of the Muslims coming in and destroying America," Gonzales rattles off as Dauenhauer rips off flyers from bulletin boards. "The Muslims are nothing but devil, Satan worshippers… and Mohammed was married to a little girl… pedophilia runs deep in the Muslim community."

Viral
WATCH: Cali Woman Goes on Racist Rant After Man Asks Her to Clean Up After Dog

The video of Gonzales and Dauenhauer walking through the mosque was deleted after the Arizona Republic contacted Gonzales about the incident. However, the footage was obtained by Facebook user Naui Ocelotl and shared before it was taken down.

"It was really disheartening to see how ignorant some people can be," Ahmad Al-Akoum, an imam at the mosque, told Arizona Central. "The thing that affected me most was those young children being drafted by their mom and being taught hate and intolerance," he said.

"It was really disturbing for them to feel comfortable enough to come inside… and do all of that," he added.

Imraan Siddiqi, executive director of the Council on American Islamic Relations' Arizona chapter, told the outlet that the behavior exhibited in the recordings is "really a peek inside what's happening in this polarized state of our nation."

Neither Gonzales nor Dauenhauer have spoken out over the media coverage on the incident.