'Get Them Out:' Re-Elected Merkel Wants to Downsize Right-Wing AfD 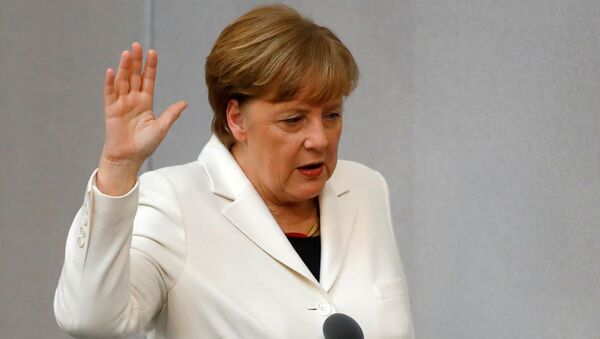 The Alternative for Germany party (AfD) is a fierce critic of Chancellor Angela Merkel, particularly of her refugee policies, and has repeatedly called for her resignation.

Angela Merkel, who has just been re-elected to a fourth term, is all set to win back voters lost to the opposition AfD.

She also wants to phase out the AfD from the country’s political landscape.

With the so-called grand coalition between Merkel’s  CDU/CSU alliance and the SPD finally in place, Angela Merkel is now is all set to hit back.

"Our goal is to solve the problems of those who voted for this party out of protest," Merkel told the public broadcaster ARD.

"That means, of course, our aspiration is to reduce their numbers and, ideally, get them out of the German parliament," she added.

Merkel further underscored that her government’s primary goal will be to address the problems plaguing the nation.

Merkel's Staff Rules Out Coalition With AfD: 'We Will Never Accept Their Ideas'
Angela Merkel was sworn in as Chancellor of Germany after lawmakers voted to re-elect her as leader in a close vote on Wednesday morning with even lawmakers within her governing grand coalition voting against her.

The parliamentary vote ended months of political turmoil after the September 24, 2017 federal election saw millions of voters desert Merkel's Christian Democratic Union and the Social Democratic Party turning instead to parties on the left and right.

The Alternative for Germany (AfD) party, which was previously unrepresented in the Bundestag, became the third largest party in parliament with 12.6 percent of the vote.

The AfD is currently the largest opposition party in Germany.