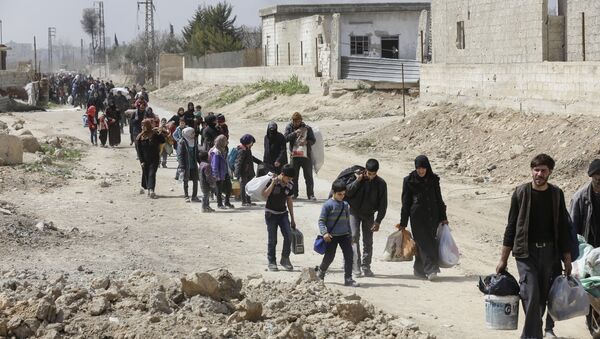 The humanitarian pause in the war-torn region of Eastern Ghouta has enabled a huge number of civilians to leave the area amid intensified militant attacks.

"In accordance with the agreement reached, with the assistance of the Russian Center for Reconciliation, the withdrawal of civilians from the settlements of Hamuria, Sakba and Khazze south of the city of Douma is being carried out along the humanitarian corridor opened on March 15. At present, more than four thousand people have been withdrawn from Hamuria. The withdrawal of civilians continues. By the end of the day, at least 13,000 people are expected to leave," representative of the Russian Center for Syrian Reconciliation, Major-General Vladimir Zolotukhin reported.

The Syrian authorities have organized reception points for those who've left the conflict-torn area, where they receive aid, including medical treatment, get hot meals and water.

In addition, with the assistance of the Russian Center for Syrian Reconciliation, a humanitarian convoy of 25 heavy vehicles delivered 137 tons of food, baby food and medicine to the city of Douma on Thursday to help the population.