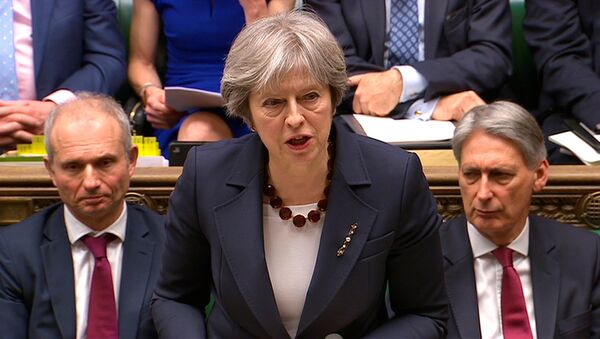 Prime Minister Theresa May has announced the largest expulsion of Russian diplomats from the UK since the Cold War over the alleged attack on a former spy. Moscow has denounced May's claims as baseless.

London has submitted to Moscow a list of Russian diplomats who must leave the UK as personae non-grata, and Russia is preparing a mirror response, Russian Foreign Ministry spokeswoman Maria Zakharova said Wednesday.

"The list was sent by diplomatic channels to the Russian side. These are Russian diplomats, including members of the military attache staff. We have it. They must leave Great Britain within seven days," Zakharova said in the "60 Minutes" program aired on Rossiya 1 television.

"We are preparing our response and will notify the British side when it's ready," she added.

The Russian Foreign Ministry said earlier that it regarded the punitive measures against Russia announced by UK Prime Minister Theresa May over Moscow's alleged involvement in the poisoning of ex-spy Sergei Skripal as a gross provocation that undermines the foundations of a normal interstate dialogue between the two countries.

"We consider it categorically unacceptable and reproachful that the British government, while pursuing its unseemly political goals, opted for further serious aggravation of relations, announcing a whole set of hostile measures, including the expulsion of 23 Russian diplomats from the country," the Ministry's statement said.

The Russian Embassy in London called the expulsion of the diplomats "unacceptable, short-sighted and unjustified."

In a statement, the Embassy confirmed that the diplomats had been declared personae non grata, adding that London was to blame for the harm caused to Russian-UK relations by this "hostile step."

The Russian Embassy's reaction followed UK Prime Minister May's address to the House of Commons, where she announced a response to the alleged attack on Skripal.

Reiterating a claim she made Monday about Russia's alleged culpibility in the Skripal case, the prime minister accused Russia of an "unlawful use of force against the United Kingdom," saying this crime was part of a well established pattern of "Russian state aggression" in Europe, and accused Moscow of "sarcasm, contempt and defiance" in its response to London's ultimatum to provide further information.

May announced that 23 Russian diplomats "identified as undeclared intelligence officers" will be expelled and given one week to leave. 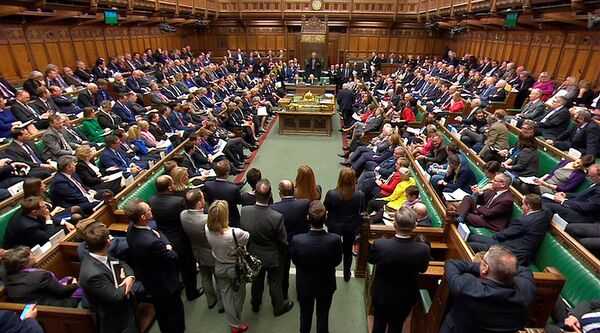 Britain's Prime Minister Theresa May addresses the House of Commons on her government's reaction to the poisoning of former Russian intelligence officer Sergei Skripal and his daughter Yulia in Salisbury, in London, March 14, 2018
© REUTERS / Parliament TV

Second, she vowed the creation of new legislative powers against "hostile state activity," as well as possible new counter-espionage powers.

May promised the freeze of Russian assets in cases where they threaten UK citizens or property, adding there was no place for those seeking to do harm British citizens in the UK.

London will suspend all high-level contacts with diplomatic officials from Moscow, including during the upcoming FIFA World Cup in Russia, which British ministers and members of the royal family will skip.

The prime minister stressed that the London and its allies will coordinate its actions, and welcomed support received from NATO and the EU. A NATO Council meeting will be held to discuss the matter on Thursday. The UK is also pushing for a debate at the UN on the Skripal case and has asked the Organization for the Prohibition of Chemical Weapons to help verify its claims against Moscow. 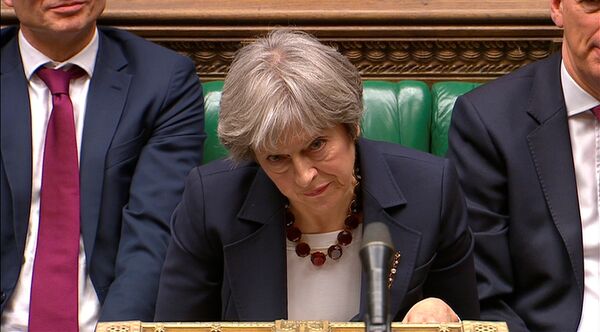 Britain's Prime Minister Theresa May reacts as the leader of the Labour Party Jeremy Corbyn responds to her address to the House of Commons on her government's reaction to the poisoning of former Russian intelligence officer Sergei Skripal and his daughter Yulia in Salisbury, in London, March 14, 2018
© REUTERS / Parliament TV

US Had Access to Substance Allegedly Used to Poison Skripal Since 1999 – Report
Responding to a lawmaker's question about whether she will respond to any Russian response with an even firmer response, May said there were "other measures" that London stands ready to deploy should it face "further provocations" from Moscow.

May accused Russia of having a "pattern" of aggression, from Syria to Crimea and Eastern Ukraine, to meddling in elections in other parts of the world to "propaganda" and "misinformation campaigns."

Asked is the UK will seek to further diversify away from the delivery of Russian gas, May confirmed that "we are indeed looking" to other countries for supplies.

Asked whether Russian English language media including RT would be targetted, May said that this was not a matter for the government, but for media regulator Ofcom. She added that the UK would continue to support the efforts of BBC's Russian language service. Moscow had previously warned that UK media would be expelled from Russia if Russian media was expelled from the UK.

May encouraged lawmakers to send a "clear message" by refusing to appear on RT and Sputnik.

Ex-GRU officer and MI6 double agent Sergei Skripal and his daughter Yulia were found unconscious on March 4 outside a shopping center in the southern English city of Salisbury. Police believe they were poisoned by a "very rare" nerve agent. The pair remain hospitalized in critical condition.

Assange: UK Foreign Office Gears Up for Propaganda War Against Russia
Not waiting for the conclusion of the investigation, Theresa May accused Russia of responsibility for the attack.

Investigators suspect that a nerve agent known as Novichok was used in the poisoning attack. Russian officials have pointed out that Moscow destroyed its stocks of the weapon in the 1990s. US media have also revealed that the Pentagon has had access to the nerve agent since the late 1990s, when it was tasked with helping to dismantle a Soviet-era chemical weapons research institute in Uzbekistan.

Moscow has dismissed all accusations of involvment in the Skripal incident and requested access to the case. Russian Foreign Minister Sergei Lavrov has characterized London's claims as "propaganda," and complained that Russia wasn't being provided with any evidence regarding the crime, in spite of the accusation of Russian involvement, and the fact that Russia had made an official request for information regarding a crime which affected Yulia Skripal, who is a Russian citizen.