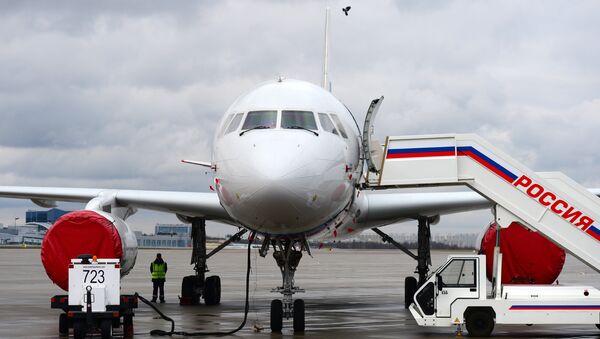 Syrian activists alleged on Twitter that a Tu-204-300 Russian passenger aircraft had been seen arriving at Damascus International Airport. The Russian Defense Ministry has yet to comment on the information.

According to the online service Flightradar24, in the early hours of March 14, the purported Russian Tu-204-300 passenger aircraft had already left the Arab Republic and returned to Russia.

The plane allegedly arrived in the Syrian capital from Moscow and then traveled to Hmeymim airbase in Latakia province.

The Tu-204-300 that arrived in Damascus, judging by the photo released by Syrian activists on Twitter, has the registration number RA-64057. An aircraft with this number is operated by a special flight detachment, "Rossiya," which is used by Russian dignitaries.

There is no information about who arrived in Syria; the Russian Defense Ministry has yet to comment on the information. The last high-ranking state official who was not related to the armed forces to visit the war-torn country was the chairman of the Investigation Committee Alexander Bastrykin.

The Tu-204-300 with the number RA-64057 is designed for 65 passengers and features a comfortable cabin, equipped with couches, an office and a shower. This aircraft was transferred to the presidential air squad in 2012.