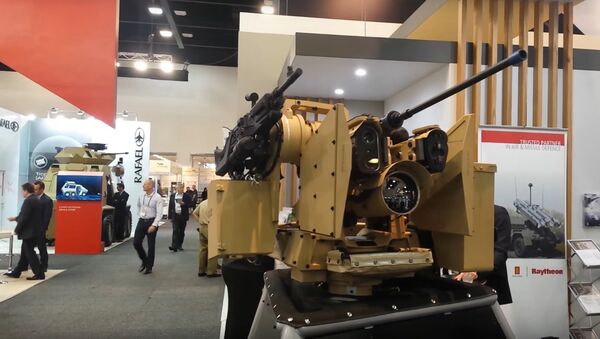 © Photo : YouTube/Defence Technology Review Magazine
Subscribe
The deal, which involves 15,000 man-years and over 170 Norwegian subcontractors, is part of a wider cooperation agreement with Qatari authorities on the development of defense, maritime industry and digitalization problems, Kongsberg said, while adding that it saw a "huge potential" in the middle Eastern country.

Norwegian defense contractor Kongsberg Gruppen has signed a letter of intent to supply equipment for military vehicles to Qatar worth up to NOK 15 billion ($1.93 billion), its largest deal to date, the company reported.

Kongsberg was picked for an eight-year deal to supply weapons technology and digitalization systems to 490 armored vehicles that will be produced by France's Nexter, it added.

While the Qatari-French deal was announced late last year as part of a major military procurement package, the Norwegian company's role had not previously been disclosed.

According to Lie, the deal means a lot for employment in the company, as it is expected to result in 15,000 man-years.
"Apart from ensuring a lot of man-years in the years to come, it is also expected to result in the hiring of extra personnel, both within Kongsberg. "certainly our 170 subcontractors will be involved in the project," Lie said.

​During the first phase of the deal, Kongsberg will deliver Protector remote weapon stations and Medium Caliber Turrets developed for the increased protection of personnel.

The Protector was developed in cooperation with the Norwegian Armed Forces at the end of the 1990s, and since been continuously updated. As of today, close to 20,000 systems are in use among 19 nations.

As part of the deal with the Qatari authorities, Kongsberg set up a separate company for technology development programs together with Barzan Holdings. The company, named BK Systems, is headquartered in Qatar and led by a Kongsberg manager. According to NRK, it is seen as an international innovation hub for research and development.

"BK Systems will be an important company for the development of technology and solutions within the defense, digitalization and maritime industry in Qatar. The establishment of this cooperation shows that the Norwegian high-tech industry is world-leading and in demand. We see considerable opportunities and potential for Norwegian industry and technology development with this establishment," Kongsberg President and CEO Geir Håøy said in the press release.

Headquartered in a Norwegian city of the same name, Kongsberg Gruppen supplies high-technology systems and solutions to customers in the merchant marine, defense, aerospace, offshore oil and gas industries, as well as renewable and utilities industries. In 2016, Kongsberg had revenues of close to NOK 16 billion and had over 7,100 employees in more than 25 countries.