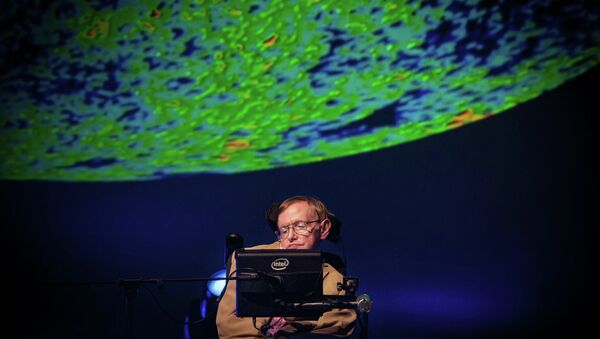 The British scientist was famed for his work with black holes and his theory of relativity, and wrote several popular science books including A Brief History of Time. When he was 22 and at the University of Cambridge he was only given years to live after being diagnosed with motor neuron disease.

When he was 22 and at the University of Cambridge he was only given years to live after being diagnosed with motor neuron disease. The rare form of the illness left him in a wheelchair and unable to speak except through a computer voice synthesiser. Professor Hawking shot to international fame after the 1988 publication of "A Brief History of Time", one of the most complex books ever to achieve mass appeal.

Sputnik spoke to Associate Professor Jonti Horner in Computational engineering at university of South Queensland, Australia and to Dr Rebecca Allen from the Centre for Astrophysics and Supercomputing at Swinburne University to get the insights on Hawking's life and his ultimate endeavor to change the perceptions of the very basics in fundamental physics.

Jonti Horner: I come from a background of being an amateur astronomer, that’s where I started, but I discovered I was really interested in astronomy when I was 5 years old, I was 10 when the  Brief History of Time book launched and as a kid I devoured everything that was associated with my passion of astronomy.

But what I remember more than that about it is that I was in a low economic area, I was in Yorkshire after during the mining strikes, somewhere that science wasn’t cool and astronomy wasn’t cool, people were talking about this book and getting excited about it, that’s the best complement you can pay anyone. The big impact for me was the role that that book had in firing up passions for cosmology, black holes things like this, getting people excited.

Jonti Horner: He’s been hugely prolific throughout his career, he’s done a lot of challenging research to push the boundaries of what we know, particularly talking about things like black holes.

The think in many circles that get people excited and he’s most famous for is his idea of Hawking radiation. Prior to his work on black holes, people assumed that they could grow and devour things that fell into them, but they never shed that mass again, that was taken as a given.

Hawking’s theory suggested that black holes could shed mass and eventually evaporate. You have this idea that at the birth of the universe and the big bang and that was revolutionary and changed the way people thought about black holes, and this is one of the challenging theories he had.

Jonti Horner: People will be building on his theoretical framework and all the mathematical work theories of quantum mechanics and black holes. Within that discipline his work will be impactful and drive theories forward. For scientists that were great communicators, which he was, was the impact they had more widely for inspiring people and getting people involved and acting as a role model to inspire the next generation.

Certainly his media work and appearances on TV shows such as the "Big Bang Theory" did a great job of making science not cool again but making it accessible. I don’t think you can overlook the influence he had as someone who had a visible disability in teaching people that just because someone is physically disabled it doesn’t mean there mind is anyway impaired.

Rebecca Allen: Well the fact that Stephen was the kind of scientist that wanted to go out and explain the unexplainable, like black holes these crazy mysterious phenomenon in astronomy and the fact that someone was willing to be stubborn enough to work through and continuously progress towards a type of physics that could explain the phenomenon is very inspiring to me and a lesson you can’t give up and if you’re really determined, you can do incredible work. What he did to advance his field is admirable.

Rebecca Allen: Well you know he’s challenged our very idea of how the universe began and the big bang theory is very popular but he wasn’t afraid to challenge the idea of perhaps it wasn’t a beginning, there wasn’t a burst of energy. In fact it’s a state of continuously expanding. The fact he had the gumption to challenge the theories of how the universe began in more than one universe, it’s extremely incredible legacy.

Rebecca Allen: I think the major achievement is still to try and create a unified theory of gravitation to bridge quantum mechanics and general relativity.

And so the challenge is still there for theoretical scientists to continue to work to that goal because there’s still gaps in our knowledge about this extremely dense states in our universe are able to occur at all and evolve and certainly people will be picking up where he left off.