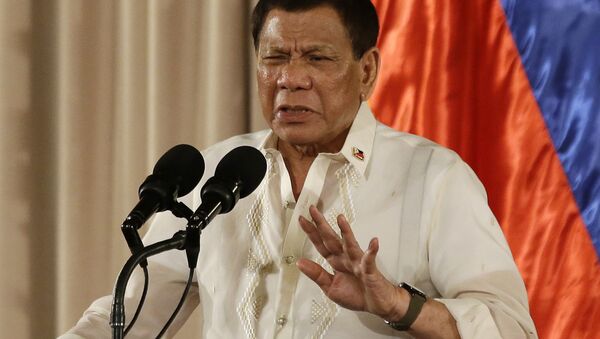 MOSCOW (Sputnik) - Philippine President Rodrigo Duterte has announced the upcoming withdrawal of the country from the Rome Statute of the International Criminal Court (ICC), the presidential press service said Wednesday in a statement.

"I confirm that PRRD [President Rodrigo Roa Duterte] has directed the ES to give notice that we are withdrawing as a State Party to the Rome Statute of the International Criminal Court," the statement reads.

In February, the ICC launched a preliminary inquiry into allegations of crimes against humanity committed by Duterte.

According to media reports, Duterte is dissatisfied with "attacks" on him and his administration from the part of UN officials as well as an "attempt" by the ICC to place him under the court’s jurisdiction.

Philippines' Duterte Ready to Resign in Advance - Reports
The Philippine president's decision comes amid a bitter conflict between him and the UN as Duterte has been waging war of words with the international body for a long time already. Recently, Duterte called for the military to refuse to cooperate with UN experts and suggested “throwing them to the crocodiles.” This was Duterte's response to UN human rights chief Zeid Ra'ad Al Hussein, who suggested last week that the island nation's president should undergo a psychiatric examination because of his colorful comments.

In addition, the UN and ICC are conducting investigations into Duterte's alleged extrajudicial killings as the Philippine government wages a full-on war against drug lords.

The large-scale anti-drug campaign known as the war on drugs was launched by Duterte in June 2016 as a follow up to his election promises to end drug-related crimes in the country. Since then, over 7,000 suspected drug users and dealers have been killed by Philippine National Police officers or unknown gunmen, according to Human Rights Watch. The campaign has been sharply criticized by the international community and human rights groups.

The ICC is an intergovernmental organization located in The Hague, which prosecutes individuals convicted of crimes against humanity and war crimes when national courts are unwilling or unable to prosecute criminals. There are currently 123 members in the organization.