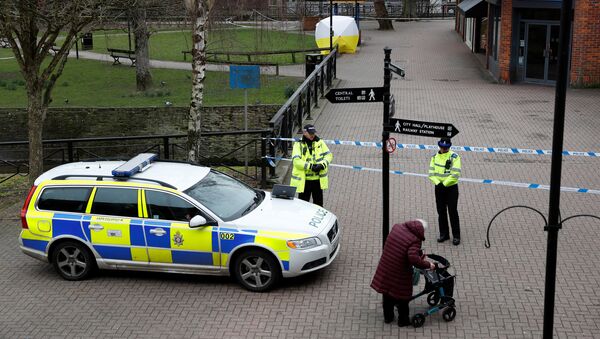 LONDON (Sputnik) - UK Prime Minister Theresa May said in her address to the lower chamber of parliament on Monday that ex-Russian spy Sergei Skripal, who also reportedly served in MI6, and his daughter Yulia were poisoned by Novichok nerve-agent, developed in Russia.

"The Government has concluded that it is highly likely that Russia was responsible for the act against Sergei and Yulia Skripal," May told the Parliament.

The prime minister voiced two versions of the events — "either this was a direct act by the Russian state against our country or the Russian government lost control of its potentially catastrophically damaging nerve agent and allowed it to get into the hands of others."

Now London expects explanations on the issue from Moscow until the end of Tuesday and vowed to deliver a new public statement on Wednesday.

The Novichok (Newcomer) family of military-grade nerve agents was developed by the Soviet Union in the 1970s and 1980s. There are more than 100 formulations in the family. Novichok agents are dispersed as an ultra-fine powder rather than a gas or vapor. They can be inhaled, ingested, or absorbed through the skin. The result of their impact is involuntary contraction of all muscles, leading to cardiac arrest and asphyxiation.

On March 5, UK police said that a man and a woman were found unconscious on a bench at a shopping center in southern town of Salisbury, adding that both people were "in a critical condition in intensive care" and being treated for suspected exposure to an unknown substance. The man and woman were later confirmed to be Skripal and his daughter.

Russian FM: UK Using Skripal Case to Undermine Soccer World Cup in Russia
May said that London’s claims are based on “the positive identification of this chemical agent by world-leading experts at the Defence Science and Technology Laboratory at Porton Down.” The laboratory is located 7 kilometers (4 miles) from a place where the Skripal family was poisoned.

The prime minister went on to say that “Russia has previously produced this agent and would still be capable of doing so.”

The head of the UK government added that the foreign secretary had also demanded that Moscow should immediately disclose the details of the program of production of the nerve agent used in the Salisbury incident to the Organisation for the Prohibition of Chemical Weapons by the end of Tuesday.

Following the UK prime minister's claims on Russia's alleged involvement in the Salisbury incident, UK Labour Party leader Jeremy Corbyn urged the government to actively engage with Russia in a "robust" dialogue on all issues that were currently on the agenda, instead of further escalating the tensions.

"We need to see both the evidence and a full account from the Russian authority in light of the emerging evidence that the prime minister has just referred to … We need to continue seeking a robust dialogue with Russia on all the issues currently dividing our countries – both domestic and international, rather that simply cutting all of contact and letting the tensions and divisions get worse and potentially even more dangerous," Corbyn said.

Moscow said in response to London’s claims that accusations of having links to suspected poisoning of Skripal are provocative and aimed at undermining trust for Russia as an organizer of the 2018 FIFA World Cup.

“The conclusion is obvious – it is another informational and political campaign based on provocation,” the Russian Foreign Ministry said.

Russia reminded the United Kingdom of numerous cases of mysterious deaths of the Russian citizens on the UK soil.

The provocative media campaigns against Russia in the light of 2018 World Cup were expected, according to the spokeswoman.

"As we expected, the United Kingdom is especially active, being unable to forgive Russia, that it was our country that won the right to host the 2018 FIFA World Cup in a fair struggle. The UK media are actively repeating calls for a boycott of the upcoming World Cup. Such proposals come not only from journalists, but also from officials — in particular, Foreign Secretary Boris Johnson and Chairman of the Foreign Affairs Committee of the House of Commons [Tom] Tugendhat," the Russian Foreign Ministry said.

The ministry added that such "provocations" were complicating the bilateral relations and damaging world sports.

The claims made by the UK prime minister have been also met with a harsh criticism by Russian senior lawmakers, who highlighted the lack of evidence in the statement.

"It is an absolutely groundless allegation. Let them prove it, let them show some kind of evidence of Russian responsibility, but there will be none," Deputy Chairman of the Federation Council's Committee on International Affairs Vladimir Dzhabarov told Sputnik.

Ofcom Vows to Review Possible Measures Against RT Over Skripal's Case
The lawmaker added that the provocation could have been carried out by UK security services or similar agencies in third countries in order to accuse Russia of another wrongdoing. Dzhabarov also suggested that this provocation specifically targeted the presidential elections in Russia on March 18.

The same opinion was expressed by another Russian senior lawmaker, Leonid Slutsky, the chairman of the Russian lower house's International Affairs Committee.

“London's position in the investigation into the poisoning of Skripal reflects the latest trends in the West – there is no evidence, but Russia is to blame. This is yet another provocation involving unfounded accusations, which may have different goals and causes — related to both domestic politics [of the United Kingdom] and the conduct of the presidential election campaign in Russia,” Slutsky told reporters.

First Deputy Chairman of the Russian parliament's lower house Committee on Foreign Relations Dmitry Novikov also pointed that the situation could be used in order to sow discord in the Russian society.

Andrey Klimov, the chairman of the Russian upper house's commission on protection of state sovereignty, noted that Russia would give “adequate and prompt” response to possible expulsion of Russian diplomats from the United Kingdom in respect to the suspected poisoning.

“If the United Kingdom decides to expel Russian diplomats in connection with the Skripal case, Moscow's response will be adequate and prompt. This situation generally resembles a well-thought-out anti-Russian action,” Klimov told Sputnik.

Who is Sergei Skripal?

Former Col. Skripal worked in the Russian military intelligence (GRU) until 2000. He was spotted by the UK intelligence service MI6 in Spain, where he was serving as Russia’s military attache, according to media reports.

Stoltenberg: Former Spy Skripal’s Poisoning ‘of Great Concern to NATO’
Skripal was reportedly recruited by the UK intelligence in 1995, providing valuable information about the Russian intelligence service and the military objects.

After Skripal left GRU, he continued to work for MI6, meeting with the secret service’s agents in Spain. In total, he has received about $100,000 from the UK intelligence for the information, according to media reports.