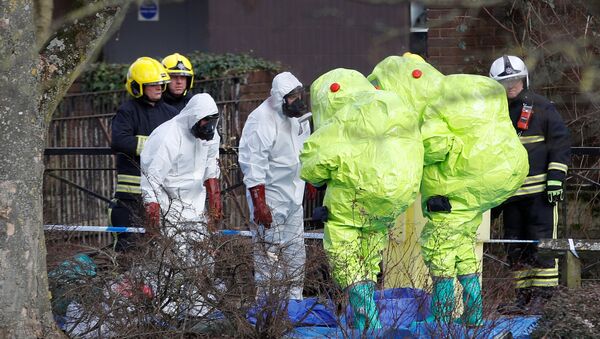 Prime Minister Theresa May's claim that it was "highly likely" that Moscow was behind the poisoning of Russian ex-spy Sergei Skripal has pushed British media into full on speculation mode as to how London should respond. Sputnik has compiled some of the most menacing as well as outright absurd options.

During her speech to parliament on Monday night, Theresa May claimed that Skripal was killed by a military-grade nerve agent specifically developed in Russia, and demanded that Moscow provide an "immediate" explanation, or face a "full range of measures…in response," without elaborating. Moscow called the address an evidence-free "circus show in the UK's parliament," and pointed out that the Russian nerve agent program May was referring to had been scrapped.

But the lack of credible evidence about a 'Russian connection' in the ex-spy's attempted murder did not stop British media from launching a campaign of speculation about London's possible response, with the major newspapers seemingly competing with one another to try to think up the scariest, most aggressive retaliatory measures imaginable.

The Times may very well take the prize for the most bellicose gossip, suggesting that May's statements on the Skripal case have "cleared the way for a cyberattack on Russia." The paper talks about British government hackers targeting Russia with malicious attacks on Kremlin computer networks, websites publishing "fake news", and other targets.

Screengrab of The Times' piece on May's remarks.
© Photo : Screenshot

The Guardian, for its part, speculates that the unilateral actions UK authorities could take may include "throwing out" Russian diplomats, including the ambassador. Other measures may include pulling Russian media outlets' broadcasting licenses in Britain, boycotting the World Cup in Russia this summer, or introducing new restrictions and asset freezes against wealthy Russian individuals living or working in the UK.

The UK might even designate Russia a state sponsor of terror, The Guardian says, or push for Russian banks to be cut off from the Swift international bank transfer system. In any case, one thing is clear, according to the newspaper: the Skripal case has plunged already rocky Russian-UK relations "into their worst state since the cruise missile crisis in the 1980s."

Screengrab of The Guardian's brainstorming on the impending consequences of the Skripal scandal
© Photo : Screenshot

With a Little Help From Our Friends

The Financial Times, for its part, decided to go with a more enigmatic approach, leading into its story with the phrase "Moscow could be surprised by the severity of the British reaction." Arguing that it was unlikely for the UK to skip the World Cup, since it "might feel more like a punishment for England than for Russia," the paper suggested that London's response will likely involve "much stronger measures aimed at business and finance," and/or adopting something akin to the US's Magnitsky Act.

More than anything, the FT seems to hope that London's allies in Europe and Washington will help it put more pressure on Moscow. If that occurs, "it is possible that Mr. Putin will get a much firmer and more coordinated Western response than he bargained for," FT concludes.

(Don't) Give Peace a Chance

The Telegraph, meanwhile, seemed focused on shouting down parliamentary opposition leader Jeremy Corbyn, who urged a continuation of dialogue with Russia, "rather than simply cutting off contact and simply letting tensions and divisions get worse, and potentially even more dangerous." In its response, The Telegraph gave Conservative MPs a platform to heckle the Labour Party leader, with the main message being that dialogue would only encourage Russia to "engage in further acts of state-sponsored terror." 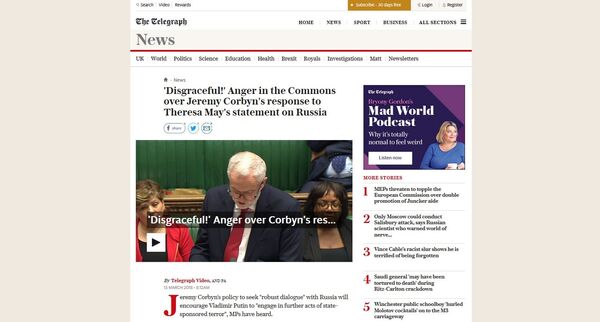 Rounding out the UK media's response were the country's tabloids, whose time-tested approach has been to run Russia into the dirt, normally topped off with a photo of Russian President Vladimir Putin making a menacing face. The Daily Mail emphatically asked "How Can We Go to Putin's World Cup Now?", with Metro going with "From Russia…With Hate." Compiling the tabloids' front pages in a Twitter post, independent journalist Max Blumenthal described their approach as a shameless attempt to "turn up New Cold War heat," and "opportunistically push" UK regulators to pull RT UK's broadcast license.

London's official 'response' to a crime it has yet to prove Russia had any involvement in will come soon enough, with May giving Moscow until the end of Tuesday to provide a 'credible response' regarding its nerve agents program. In the meantime, British media seem intent on preparing the public for the worst.

Russian Journalist Covering Skripal Case Reveals She Was Threatened in UK
Russian ex-spy Sergei Skripal and his daughter Yulia were found unconscious outside a shopping center in the southern English city of Salisbury on March 4. Police suspect they were poisoned by a "very rare" nerve agent. The pair remain hospitalized and in critical condition. When he was discovered spying for MI6, Skripal was convicted to 13 years in a Russian prison, before being released in 2010 by President Dmitry Medvedev as part of a spy swap program; he settled in Salisbury in 2011.

On Tuesday, Russian Foreign Minister Sergei Lavrov complained that Russia had asked for and was denied access to samples of the nerve agent allegedly used to poison Skripal and his daughter, as well as all the relevant facts and documents connected with the investigation. Moscow made the request out of concern for Yulia Skripal, who is a Russian citizen, and because of the claim that the nerve agent in question was produced in Russia.