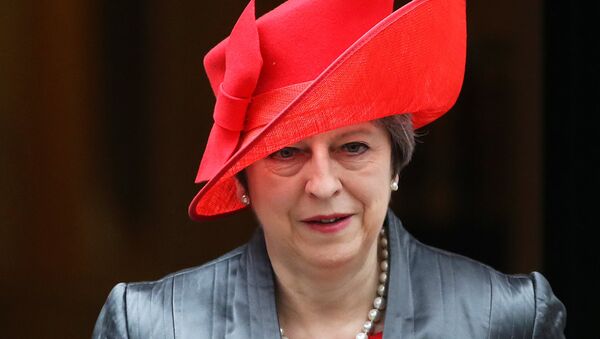 © REUTERS / Simon Dawson
Subscribe
After the British premier detailed how the ex-Russian spy and his daughter were chemically poisoned in the British city of Salisbury allegedely with Russians involved, web users set about making a slew of hilarious memes.

Following Theresa May's address to the British MPs on March 12, Russia has reiterated that it not only halted the production of the so-dubbed Novichok, or "newcomers" nerve agent, allegedly used to poison the Skripals, but also destroyed all its stock, as confirmed by international observers of the Organization for the Prohibition of Chemical Weapons (OPCW). However, the British leadership appears to have turned a deaf ear to it. In the meantime, the Russian statement hasn't gone unnoticed on Twitter.

Most netizens have come up with a really stormy reaction to Theresa May's "circus" comment in the British Parliament on Monday as spokeswoman for the Russian Defense Ministry Maria Zakharova put it, saying it is based on no evidence.

Some called May's remarks most "pathetic warmongering," while others underscored them being absolutely groundless:

Only two possible explanations: #RussiaDidIt or #RussiaDidIt. Such absolutely pathetic #Warmongering with #US backing, no less. #NuttersAll!

The majority, however, chose to laugh it all off with a set of hilarious memes:

Some netizens are openly questioning how Russians thought they would be able to get away with it if they killed the former spy:

The question is — if The Russians did perpetrate that nerve agent poisoning to kill one former agent — how did they think they'd get away with it. If they didn't care through arrogance what can May possibly do that might impress them?

In one comment, a Twitter who goes by the name Ian56, even uploaded a hilarious picture of Theresa May holding a test tube in her hands, which immediately refers to the ultimatum she issued to Moscow demanding the Kremlin respond:

Another Twitter user touches upon a British nerve gas factory in Porton Down, a stone's throw from where the Skripals were poisoned, saying it would be strange to cite the Russian trace in the case given the aforementioned fact:

We are supposed to believe that someone brought nerve agents from Russia to poison people just a mile away from British nerve gas factory in Porton Down? what kind of madness is this?

In the meantime, May is giving in to her delusions and assails the audience with yet another set of fallacies, saying it is "highly likely" that Russia is behind the nerve agent assault.

Does the phrase ring a bell? Yep, those are the exact words one of May's predecessors, Tony Blair, notoriously pronounced with regard to Saddam Hussein being "highly likely to" hit the UK with a chemical weapon missile in less than an hour. The Twitterati were quick to make mention of this.

Others immediately recalled that Russian oligarchs and their associates had registered donations of more than £820,000 to the Conservative Party since Theresa May became prime minister, thus questioning if these were ever to be returned:

Theresa May says there will be a robust response in the event of credible evidence of Kremlin involvement in the nerve agent poisoning case… though not amounting to the return of £820,000 worth of… err, donations.

There are also those, engaging in conspiracy theories and mentioning Ukraine as a potential perpetrator:

Some Russians are suggesting that Ukraine may still have Soviet era stockpiles of Novichok Nerve Agent & Ukraine Neo Nazis could have poisoned #Skripal as a #FalseFlag to escalate hostilities against Russia.
Its possible but there's no evidence to support it. pic.twitter.com/CM9mHU7PPx

000000
Popular comments
I tend to go with the Ukraine hypothesis, though I don't think they would have been able to pull it off without a helping hand from someone (guess who).
Medvezhonok
13 March 2018, 23:50 GMT
000000
may is a pathetic joke. It will be interesting to see if she puts british servicemen and women into harms way because of her stupidity, american exceptionalism and media scavengers.
michael
14 March 2018, 10:12 GMT
000000
Newsfeed
0
New firstOld first
loader
LIVE
Заголовок открываемого материала
Access to the chat has been blocked for violating the rules . You will be able to participate again through:∞. If you do not agree with the blocking, please use the feedback form
The discussion is closed. You can participate in the discussion within 24 hours after the publication of the article.
To participate in the discussion
log in or register
loader
Chats
Заголовок открываемого материала
Worldwide
InternationalEnglishEnglishMundoEspañolSpanish
Europe
DeutschlandDeutschGermanFranceFrançaisFrenchΕλλάδαΕλληνικάGreekItaliaItalianoItalianČeská republikaČeštinaCzechPolskaPolskiPolishСрбиjаСрпскиSerbianLatvijaLatviešuLatvianLietuvaLietuviųLithuanianMoldovaMoldoveneascăMoldavianБеларусьБеларускiBelarusian
Transcaucasia
ԱրմենիաՀայերենArmenianАҧсныАҧсышәалаAbkhazХуссар ИрыстонИронауОssetianსაქართველოქართულიGeorgianAzərbaycanАzərbaycancaAzerbaijani
Middle East
Sputnik عربيArabicArabicTürkiyeTürkçeTurkishSputnik ایرانPersianPersianSputnik افغانستانDariDari
Central Asia
ҚазақстанҚазақ тіліKazakhКыргызстанКыргызчаKyrgyzOʻzbekistonЎзбекчаUzbekТоҷикистонТоҷикӣTajik
East & Southeast Asia
Việt NamTiếng ViệtVietnamese日本日本語Japanese中国中文Chinese
South America
BrasilPortuguêsPortuguese
NewsfeedBreaking
09:35 GMTEuropean Leaders Pay Tribute to Late French Ex-President Valery Giscard d'Estaing
09:06 GMTIsrael Has Exerted Efforts to Fight Air Pollution, But Has It Done Enough?
08:57 GMTEx-Austrian Chancellor Kurz Expected to Give Statement Amid Reports of His Withdrawal From Politics
08:51 GMTJapan's Nissan Announces Creation of Lunar Rover Prototype
08:34 GMTLive Updates: COVID Omicron Variant Found in Paris Region on Person Who Returned From Nigeria
08:07 GMTChurch of Sweden Under Fire For Calls to Investigate Israel for 'Apartheid'
08:03 GMTEpstein Accuser Claims Sex Predator Took Her to Meet Trump When She Was 14, Alleges No Wrongdoing
08:02 GMTNorway's Top Medical Bureaucrat Says Three COVID Shots Not Enough, Fourth May Become Necessary
07:48 GMTFSB Detains Three Ukrainian Special Agents Who Planned to Blow Up Black Sea Fleet Radio Center Mast
07:46 GMTTop US, Chinese Military Officials to Meet Amid Taiwan Tensions, Reports Say
07:39 GMTThree Arrested as Bomb Found Near US Ambassador's Residence in Icelandic Capital
07:13 GMTKamala Harris' Chief Spokesperson to Leave Office, Reports Say
06:38 GMTBoJo Under Pressure as New Allegations Arise Amid 'Boozy Party at Downing Street' Reports
06:34 GMTBelarusian President Lukashenko Says Not Going to Leave Big Politics
04:08 GMTChina Summons Japanese Ambassador Over Shinzo Abe's 'Erroneous' Taiwan Comments
03:59 GMT'It's Embarrassing': Chris Cuomo Breaks Silence After Indefinite Suspension From CNN
03:56 GMTWill Ralf Rangnick Bring an End to Ronaldo's Days at Manchester United?
02:15 GMTLukashenko Speaks on Migrant Crisis, Ukraine and Explains Why Belarus Needs S-400s
02:15 GMTCurrent Myanmar, Afghanistan Envoys to UN to Keep Posts For Now - Russian Envoy
01:51 GMTUS-UK Talks on Steel Tariffs Removal Stalled Over Northern Ireland Clause - Reports