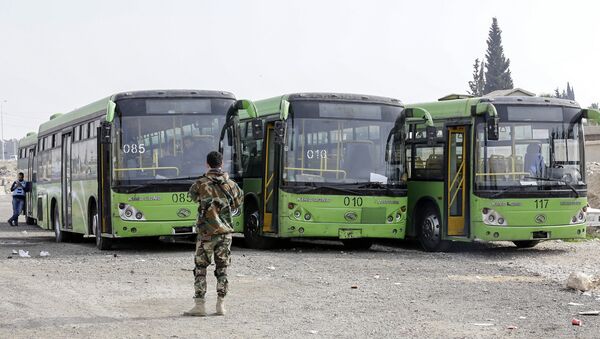 A number of militants were successfully transfered from the Al-Qadam neighborhood in Damascus to Idlib province today, paving the way for units from the Syrian Army to move in and secure the area.

The Syrian government dispatched a convoy of buses to the area yesterday to transport the militants and their families to the opposition-held province of Idlib in northwestern Syria.

It’s unclear how many people were transferred to Idlib in this latest deal – which was most likely brokered with input from the Russian Reconciliation Center in Syria.

WATCH Syrian Army Cracks Down on Terrorists in Eastern Ghouta
A number of similar deals have been agreed over the course of the nationwide, multi-sided conflict in Syria, including a few reconciliation agreements where militants agreed to disarm and were subsequently reintegrated into Syrian society. Early on in the crisis, the Syrian government created the Ministry of National Reconciliation Affairs, which is headed by Ali Haidar, to negotiate with militants and facilitate reconciliation agreements.

Al-Qadam is not a part of east Ghouta – where fighting has largely concentrated in recent weeks, with the Syrian Army launching operation Damascus Steel to liberate the pocket – but is situated next to the Yarmouk refugee camp, parts of which are controlled by Daesh* terrorists.

This latest development positions government forces closer to this Daesh-held area, and a ground offensive is likely to be launched imminently.

In a matter of weeks, the Syrian Army has recovered over 60 percent of Damascus’ east Ghouta pocket and spearheading forces are continuing to advance in the area, while negotiations for other local transfer and reconciliation deals are ongoing.

Since last week, anti-militant protests and pro-government rallies have been held almost daily across east Ghouta, with reports of at least one protest being quelled with live ammunition, resulting in a number of civilian casualties.