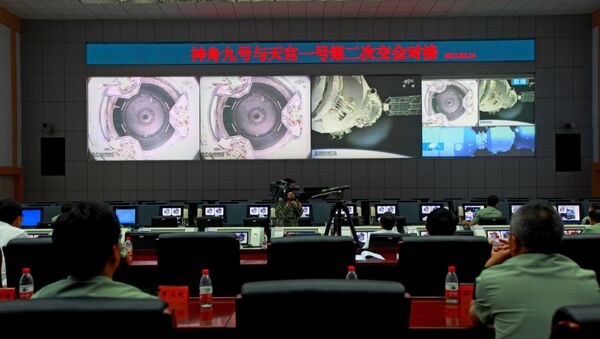 China’s first-ever space station is coming home, but it’s coming in hot and fast. The Tiangong-1 will be making an uncontrolled reentry to Earth sometime in the next few weeks and the debris poses a (very small, but not zero) chance of hitting an inhabited area.

The China National Space Administration (CNSA) reported In 2016 they had lost control of Tiangong-1 and were unable to perform a controlled re-entry, meaning the station would eventually be pulled back towards Earth and crash into the planet.

"There is a chance that a small amount of Tiangong-1 debris may survive reentry and impact the ground," reported the Aerospace Corporation, a nonprofit that receives US government funding to advise governments and private enterprises on spaceflight safety. "Should this happen, any surviving debris would fall within a region that is a few hundred kilometers in size and centered along a point on the Earth that the station passes over."

Fortunately, Earth's atmosphere will disintegrate most of the 9.4-ton satellite. But pieces as large as 220 pounds could strike the surface at speeds of, oh, 17,500 miles per hour or so. You can pretty much imagine what would happen to you if a 220-pound piece of space debris hits you in the head while moving at Mach 22.

Oh, and the Tiangong-1 is reportedly carrying hydrazine, a rocket fuel component that is toxic to humans. It's possible the hydrazine may contaminate the debris with a toxin that causes all sorts of unpleasant effects like seizures, nerve damage, pulmonary edemas and comas.

Aerospace Corporation said on Monday that they had narrowed the range of the station's touchdown down somewhat: it was likely to land in northern China (which includes the capital city of Beijing); North Korea; the northern parts of Japan, the Balkans, Central Asian countries like Kyrgyzstan and Uzbekistan, or Turkey; Cyprus; parts of Italy, Spain and Portugal; the northern US; parts of Chile and Argentina; or New Zealand and Tasmania.

So basically, they have no idea where the debris is going to touch down. Thanks, I hate it.

The fact that gigantic chunks of toxic Chinese space debris could be ruining the day of a sizable chunk of Earth's population in a pretty broad time frame was not lost on the astronomical community. Harvard astrophysicist Jonathan McDowell noted that the problem was actually worse than it seems, because in addition to the locations listed above there were huge swathes of populated areas that had a low-but-not-zero chance of also being struck.

"Remember that a 1 hour error in our guessed reentry time corresponds to an 27,000 km (17,000 mile) error in the reentry position," he tweeted Wednesday. "And currently our estimate has a 2-week uncertainty."

McDowell also noted that the odds were extremely low for any individual to be hit and that the most likely outcome was for the Tiangong-1 to completely burn up in the atmosphere or for any surviving debris pieces to fall into the ocean and bother nobody but some fish. They could also strike a sparsely inhabited area.

"When considering the worst-case location… the probability that a specific person (i.e., you) will be struck by Tiangong-1 debris is about 1 million times smaller than the odds of winning the Powerball jackpot," Aerospace wrote on Tuesday.

Tiangong-1, whose name means "Heavenly Palace," was launched in 2011 as part of Beijing's push to build a full-fledged space station by 2020. The main purpose of Tiangong-1 was to test orbital rendezvous and docking capabilities for use in that future station.

Probably the most famous incident of a satellite uncontrollably falling back to Earth was SkyLab, NASA's 77-ton space station that fell out of orbit in 1979. Since SkyLab was about eight times the size of Tiangong, the debris rain was seen as a bigger threat. NASA estimated a 1 in 152 chance of the debris hitting a person, and a 1 in 7 chance of it hitting a city.

Neither ended up happening, although some debris was found near the small town of Esperance in Western Australia, about 400 miles from the city of Perth. Esperance fined NASA 400 Australian dollars for littering. NASA didn't pay the fine.