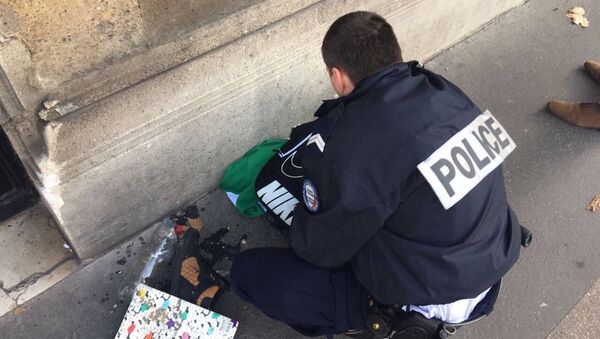 © Sputnik
Subscribe
In two separate explosions in Austin, Texas, Monday, a 17-year-old boy was killed and two women, one in middle age and one in her 70s, were injured. The explosions were the second and third in the city this month.

"Upon arrival… what we found was an explosion had occurred inside the residence. There were two people that had been injured," said a police department spokesperson, KKTV 11 reported.

The teen died at the scene, while the woman was rushed to Dell Seton Medical Center with injuries that were not life-threatening. Austin Fire, the Bureau of Alcohol, Tobacco, Firearms and Explosives (ATF) and as the FBI, are assisting with the investigation.

Following the explosion, neighbors were evacuated to a city bus that was on its morning route in the area. In addition, bomb-sniffing dogs were dispersed to check other neighboring homes for explosives.

Details about the relationship between the two and whether the lived in the home where the explosion took place have not yet been released.

A second explosion occurred in southeastern Austin Monday midday, close to Austin-Bergstrom International Airport. The woman in her 70s injured in that explosion was transported to an area hospital. Further details about that incident have not yet been revealed.

Investigators are currently attempting to determine whether the Monday blasts are related to the explosion that killed a 39-year-old Austin man March 2. The March 2 explosion, which occurred about 12 miles north of Monday's blast, has been classified as a homicide.

In all three instances, the packages were found outside the homes in the early morning and were not delivered by any mail services. Details regarding the location of the package delivered to the elderly woman's home have not yet been disclosed.

"We are looking at these incidents as being related based on similarities that we have seen and the initial evidence that we have on hand here," said Austin Interim Police Chief Brian Manley during the Monday morning press release.

"We believe these cases are linked at this time."

"We don't know what the motive behind these may be," Manley said. "We do know that both of the homes that were the recipients of these packages belong to African-Americans, so we cannot rule out that hate crime is at the core of this. But we're not saying that that's the cause as well." The race of the elderly woman injured on Monday is unknown.

However, according to Austin police, there is no current evidence that the blasts were related to terrorism.

"If you find any suspicious packages on your front porch, at your residence, call 911 and let us come out and take a look at those packages and ensure that they are safe," Manley added.

000000
Popular comments
and no mention of possible family or other connections...
michael
12 March 2018, 22:44 GMT
000000
"However, according to Austin police, there is no current evidence that the blasts were related to terrorism." Evidently, the officials haven't read their own legal definition of terrorism. After all, they invented it. None of this ever happened before what they call; "immigrants".
wconell
13 March 2018, 06:02 GMT
000000
Newsfeed
0
New firstOld first
loader
LIVE
Заголовок открываемого материала
Access to the chat has been blocked for violating the rules . You will be able to participate again through:∞. If you do not agree with the blocking, please use the feedback form
The discussion is closed. You can participate in the discussion within 24 hours after the publication of the article.
To participate in the discussion
log in or register
loader
Chats
Заголовок открываемого материала
Worldwide
InternationalEnglishEnglishMundoEspañolSpanish
Europe
DeutschlandDeutschGermanFranceFrançaisFrenchΕλλάδαΕλληνικάGreekItaliaItalianoItalianČeská republikaČeštinaCzechPolskaPolskiPolishСрбиjаСрпскиSerbianLatvijaLatviešuLatvianLietuvaLietuviųLithuanianMoldovaMoldoveneascăMoldavianБеларусьБеларускiBelarusian
Transcaucasia
ԱրմենիաՀայերենArmenianАҧсныАҧсышәалаAbkhazХуссар ИрыстонИронауОssetianსაქართველოქართულიGeorgianAzərbaycanАzərbaycancaAzerbaijani
Middle East
Sputnik عربيArabicArabicTürkiyeTürkçeTurkishSputnik ایرانPersianPersianSputnik افغانستانDariDari
Central Asia
ҚазақстанҚазақ тіліKazakhКыргызстанКыргызчаKyrgyzOʻzbekistonЎзбекчаUzbekТоҷикистонТоҷикӣTajik
East & Southeast Asia
Việt NamTiếng ViệtVietnamese日本日本語Japanese中国中文Chinese
South America
BrasilPortuguêsPortuguese
NewsfeedBreaking
09:32 GMTIndependence for Wales is ‘on the Table’ as New Commission Looks at the Future
09:23 GMTGlobal Times: US Should Stop Eyeing Too Much on China's Hypersonic Missiles and Broaden Its Horizons
09:16 GMT'Manchester United a Disconnected Team, Making Basic Errors': Gary Neville Rips Into Red Devils
09:07 GMTVideo of Erdogan, Surah From Quran Posted on Trump's Website After Hacking Attack
09:05 GMTTorch Handover for Beijing Winter Olympics Held in Greece
08:46 GMTCzech Police Probing Possible 'Crime Against Republic' Over President Zeman's Hospitalisation
08:35 GMTFake Edward Snowden Account Removed From Telegram After Whistleblower's Outburst
08:35 GMTKidnappers of 17 Missionaries in Haiti Demand $17 Million For Their Release, Reports Suggest
08:08 GMT'Under Cloak of Darkness': Biden Administration Reportedly Flying Migrant Children to Suburban NY
07:54 GMTShockwaves Felt in Israel After Powerful 6.4-Magnitude Quake Hits Greece
07:35 GMTPresident of European Commission: Brussels 'Will Not Allow' Poland to Put Bloc's Values 'at Risk'
07:16 GMTTen Years After Shalit Deal, Palestinian Prisoner Recalls His Release, Struggles, & Hopes
06:46 GMTColin Powell Would Have Made Better President Than Others in Recent Decades, Ex-US Envoy Says
06:33 GMTFlash Floods, Heavy Rains Wreak Havoc in India's Uttarakhand - Videos
06:18 GMTMI5 May Get More Control Over UK's Anti-Terror Programme in Wake of MP Amess' Killing
05:55 GMTSuspect in Sir David Amess' Murder Purportedly Spotted by CCTV in London Hours Before Attack
04:56 GMTNorth Korea Reportedly Used Submarine-Launched Ballistic Missile in Latest Test
04:06 GMTExpecto Patronum! Reddit Users Identify Strayed Dementor in 'UFO' Spotted Over London
03:38 GMTIsrael Approves $1.5Bln Budget for Possible Strike Against Iran's Nuclear Facilities - Report
03:00 GMT’Karen in the Air’: Watch Woman Preach About Pandemic Via Microphone During Midflight