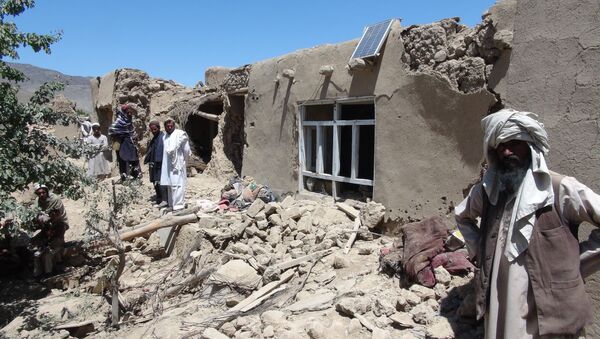 © AP Photo / Ihsanullah Majroh
Subscribe
International
India
Africa
The Soviet Union wanted to establish an internationally backed government in Afghanistan, but fallout between India and the US led to the failure of the attempt, says Indian author Kallol Bhattacherjee, who still advocates for a broad-based government with a guarantee of "no intervention" as the only solution to the Afghan crisis.

New Delhi (Sputnik) — Kallol Bhattacherjee is the author of The Great Game in Afghanistan: Rajiv Gandhi, General Zia and the Unending War (HarperCollins India, 2017). Based on documents from the collection of former US Ambassador John Gunther Dean, the book recollects how the Soviet Union along with the US, India, and Pakistan wanted to build a broad-based government in the 1980s for Afghanistan. The plan could not materialize due to diplomatic warfare which led to the end of ambassador Dean's career under tragic circumstances. Sputnik spoke with Bhattacherjee about his views on the 1980's plan.

READ MORE: Over 170 Militants Killed in Afghanistan Over Past Day — Defense Ministry

Sputnik: In your book, you have recollected that the US Ambassador to India John Gunther Dean rebelled against his government's policy of warming up to the hardline Islamists in Afghanistan and Pakistan in the late 1980s. How did this come about?

Kallol Bhattacherjee:  John Gunther Dean, who served as the US ambassador in India between 1985 and 1988 was one of the several individuals who were part of an international plan to ensure a smooth transition for Afghanistan from Soviet control to a representative rule. That plan was based on the premise that a tragic unending war in Afghanistan after the withdrawal of the Soviet forces was totally avoidable. The Soviet Union was controlling Afghanistan but in fact, wanted to ensure long-term stability in the country before leaving. The Soviets wanted to end the conflict between the Mujahideen groups and the government of President Najibullah in a responsible way.  Essentially, the end of the occupation was to lead to a political solution to Afghanistan's internal problems that had provided space for external intervention.

However, this plan did not go as desired, as India interpreted some of the actions of the United States as unhelpful for bilateral ties. For example, the US remained silent despite mounting evidence of Pakistan going ahead with its nuclear program. Then, in a major embarrassment for the government of Prime Minister Rajiv Gandhi, US authorities released a big financial and military package for Pakistan in December 1987. All these actions broke the regional consensus for a joint attempt for ensuring peace in Afghanistan.

The result of this breakdown between the US and India over Afghanistan and Pakistan embarrassed Dean, as his primary responsibility was to ensure regional cooperation in South Asia. Dean felt personally hurt by his own government's actions, as some of the US actions ensured that Dean's own career would end on a disharmonious note. That apart, there was an internal power struggle in the State Department revolving around the lobbies of the Cold War era diplomats and emerging post-Cold War experts that also played a part in ensuring the rift between the ambassador and his superiors.

Sputnik: What was the plan for the broad-based government about and who all were part of it?

Kallol Bhattacherjee: The broad-based government was first discussed at the international level in the immediate aftermath of the arrival of Soviet troops in Afghanistan in December 1979. From there, it passed to Diego Cordovez, the UN-designated negotiator for the Soviet-backed Afghan government and the Mujahideen groups who were mostly based in Pakistan. Subsequently, the idea took off when the US urged Indian Prime Minister Rajiv Gandhi to open a back channel with Soviet leader Mikhail Gorbachev, which led to an exchange of messages between the Soviet leadership and US President Ronald Reagan and his team. The idea was also supported by outsiders like the controversial petroleum Czar Armand Hammer who flew around the world and tried to put together a coalition government to be led by King Zahir Shah of Afghanistan.

It was to be a three-tier government to be led by a non-executive king. The executive power was to be in the prime minister, who would be guided by the State Council. It was not an impossible scenario. It was being worked on until the US turned against it. The exiled Afghan King Zahir Shah, who was living in Rome, was part of the plan.

Sputnik: What was the consequence of the US turning against the plan?

Kallol Bhattacherjee: The immediate consequence was that it appeared for a while that the coalition government for which India and the Soviet Union were working, would, in fact, end up as a puppet government of Pakistan, a staunch ally of the US at that time. This was unacceptable to India that wanted the government to be representative of all sections. A competition between India and Pakistan ensued. Rajiv Gandhi responded by trying to get close to all sections of the Afghan government and sent his envoy to meet King Zahir Shah in Rome. This action triggered a Pakistani response, as they believed that by meeting the Indians, the King had become a political burden. So the broad-based government had to start afresh. This was not possible because all diplomatic efforts at this time were focused on the Geneva Accords which was to be signed by March or April of 1988. So the broad-based government could not be ensured by the time the Accords were signed on 14 April, 1988. The declaration of the Soviet withdrawal, however, was on time as promised by Mikhail Gorbachev. Afghanistan was politically fractured in 1979 before the beginning of the Soviet rule and it remained in the same state in 1988-'89, as a political formula could not be arrived at despite nearly eight years of international diplomacy.

Women to Participate in Talks With Taliban - Afghan President
Sputnik: Who were the Soviet figures who were part of the broad-based government plan?

Kallol Bhattacherjee: Several people in Moscow played an important role, but the most important was the role of Yuli Vorontsov, as the vice foreign minister of Moscow. Vorontsov regularly informed Rajiv Gandhi about Soviet moves and Rajiv Gandhi, in turn, kept Moscow informed of US plans regarding Afghanistan-Pakistan. Vorontsov also engaged with the Pakistani leader General Zia ul Haq to build consensus on a peaceful future for Afghanistan. Because of written requests from US President Ronald Reagan, at times, Rajiv Gandhi served as a channel between Ronald Reagan and Soviet leader Mikhail Gorbachev, as both required him as a mediator. It was a role that Rajiv Gandhi played in a quiet manner. Some of his close advisors, like former Indian ambassador to Moscow, Ronen Sen, and Foreign Secretary A.P. Venkateswaran were partly aware of Rajiv's work.

Sputnik: Why did the US punish John Gunther Dean harshly?

Kallol Bhattacherjee: Dean felt that his appointment as the ambassador to India was his last big appointment which came after a four-decades-long service to the US. But the goal that he was to ensure in his last assignment did not materialize, as India remained skeptical of the US and Afghanistan ended up in a violent civil war and India-Pakistan ties and India-US ties deteriorated by the time Dean's term was nearing completion. So it was a personal setback for the diplomat. He finally rebelled when a series of cataclysmic events were followed by the apparent assassination of General Zia ul Haq of Pakistan in an air crash. Dean asked "Who killed Zia?" contradicting the cautious US official line.

It is not possible to guess the exact reason for the punishment that the State Department imposed on Ambassador Dean. But it appears as if Dean had to be silenced so that he could not appear in the media, which could have damaged US political leaders. The US leadership, especially Vice President George H. W. Bush, was heading for a presidential election in 1988 amidst talks of the defeat of the Soviet Union in Afghanistan. So Dean basically wanted to ensure an "October Surprise" and convey that the much-touted defeat of Soviet Union in Afghanistan was, in fact, a defeat for the world as terrorism and shadow warfare between regional powers were to escalate and affect the stability of the world.

Sputnik: Do you think a broad-based government is still relevant?

Kallol Bhattacherjee: The 'Zahir Shah formula' was the only international attempt that was made in the last forty years to ensure a peaceful Afghanistan. The government formed after the 2001 invasion has been weighed down by multiple factors that are both internal as well as external. The main issue for Afghanistan is to ensure representation of all sections of the population within the structure of the state. In that sense, a broad-based government with an international guarantee for "non-interference and non-intervention" remains as much viable today as it was in the 1980s

The views and opinions expressed by Kallol Bhattacherjee in this article are those of the speaker and do not necessarily reflect the position of Sputnik.