Disapproval Rating of Putin Decreases by 1% in One Week - Poll 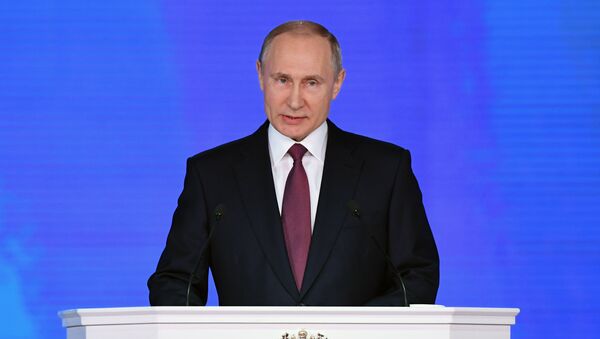 MOSCOW (Sputnik) - The disapproval rating of Russian President Vladimir Putin, who is seeking re-election in Sunday's vote, has improved in a week, going down from 7 percent to 6 percent, a poll conducted by Russian Public Opinion Research Center (VTsIOM) revealed on Monday.

Civil Initiative party candidate Ksenia Sobchak's disapproval rating stood at 82 percent, while 26 and 33 percent of voters said they would not cast their ballots for head of the Liberal Democratic Party of Russia Vladimir Zhirinovsky or co-founder of the Yabloko party Grigory Yavlinsky, respectively, the poll showed.

Up to 500,000 Russians May Be Vacationing on Election Day – Election Commission
According to the survey, the disapproval ratings of Communist Party candidate Pavel Grudinin, All-People's Union party candidate Sergey Baburin, Presidential Commissioner for Entrepreneurs’ Rights Boris Titov and Communists of Russia party chairman Maxim Suraykin stood at 24, 19, 19 and 18 percent, respectively.

VTsIOM has been conducting daily phone interviews in 2017 and 2018 on its own initiative with its own funds. During the 2017 interviews, the pollster asked 600 respondents on a daily basis. The daily rate increased to 1,000 people in the 2018 interviews.

The figures released on Monday are based on the interviews carried out on March 3-4 among adults. The interviews were conducted between the residents of about 600 settlements located in at least 80 Russian regions.

The margin of error is below 2.5 percent if the survey is based on interviews of about 1,800 people and below 1.8 percent if up to 3,000 people are interviewed.