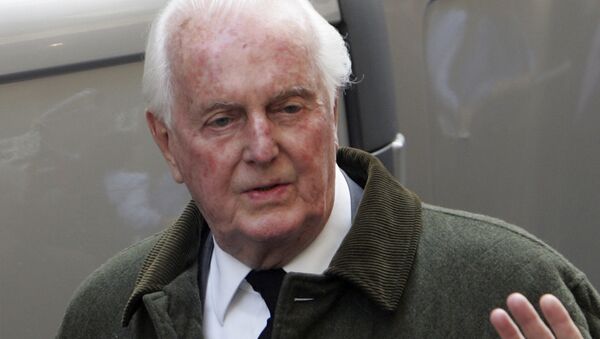 The former designer and Givenchy's longtime partner, Philippe Venet, announced through the Givenchy fashion house that Hubert de Givenchy had died at 91 in his sleep on Saturday.

Artistic Director of Givenchy Clare Waight Keller has confirmed the death of the couturier, characterizing him not only as "one of the most influential fashion figures of our time," but also as "one of the chicest most charming men" she has ever met.

I am deeply saddened by the loss of a great man and artist I have had the honor to meet and get to know since my appointment at Givenchy. Not only was he one of the most influential fashion figures of our time, whose legacy still influences modern day dressing, but he also was one of the chicest most charming men I have ever met. The definition of a true gentleman, that will stay with me forever. My deepest thoughts are with his loved ones in this difficult time.

The House of Givenchy is sad to report the passing of its founder Hubert de Givenchy, a major personality of the world of French Haute Couture and a gentleman who symbolized Parisian chic and elegance for more than half a century. He will be greatly missed. pic.twitter.com/xapm0zSwDy

Givenchy was born in 1927 in the French city of Beauvais. After the liberation of France from the Nazi occupation, he moved to Paris, where he studied at the School of Fine Arts and worked as an assistant to various fashion designers. He founded his fashion house in 1952 and presented his first fashion collection in Paris at the age of 24. The collection immediately won recognition, with Givenchy getting about 1 million euro of orders.

WATCH Drones Dominate Dolce & Gabbana Fashion Show
The designer became one of the first in the fashion world to offer a luxury ready-to-wear range. Among his famous clients were Liz Taylor and Princess Grace of Monaco. It was also Givenchy who styled former US first lady Jacqueline Kennedy.

Givenchy became famous for dressing Audrey Hepburn for the films she was starring at, including the iconic "Breakfast at Tiffany." The actress and fashion designer were close friends for forty years, and this relationship changed both fashion and cinema. Hepburn joked that she was dependent on Givenchy, "like the American people depend on their psychoanalysts."

In 1988, Givenchy sold his fashion house to luxury conglomerate LVMH. In 1995, the fashion designer announced his retirement.

Bernard Arnault, CEO of LVMH, said in a statement that Givenchy "was among those designers who placed Paris firmly at the heart of world fashion post 1950 while creating a unique personality for his own fashion label."