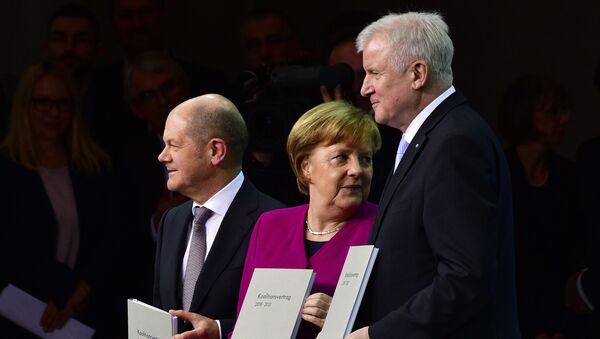 On Wednesday, the German parliament will elect Merkel as the next chancellor, after that country's President Frank-Walter Steinmeier will have to appoint ministers of the government proposed by Merkel.

At the morning briefing, all three parties' leaders said they expected the government to work for a full legislative period — four years.

Merkel Says Sometimes Exchanges Delicacies With Putin
Merkel said that the purpose of the new government would be "improving the welfare of all people in Germany," strengthening security and developing the European aspect of policy — the chancellor named, in particular, such topics as stabilizing euro, defense efforts within NATO and the European Union, as well as implementation of a common foreign policy "toward the transatlantic union, as well as relations with Russia, China and other regions of the world."

Seehofer said that the new government represented the "middle class interests" and was going to develop a "social economy."

Scholz noted that the EU agenda would be key to the future government. In the near future he will travel with Merkel to Paris to discuss the reform of the eurozone. Scholz stressed that the welfare of Germany played a fundamental role for the EU reform and called for preservation of jobs in the country.

The coalition agreement, signed on Monday, contains 177 pages. The preamble states that Germany "is experiencing new political times and facing numerous challenges, international and national ones." According to the text, to guarantee the "long-term peace, security and prosperity is possible only with the new rise of the European Union." The new government promises to improve the welfare of the German citizens, strengthen the security, stability and cohesion of society, including in the eastern part of the country.

German Foreign Minister Gabriel Refuses to Serve in New Government
The agreement points out the need to ensure equal access to education, 100% employment, improvement of the system of medical insurance and care, increasing pensions and social benefits. Transition to a digital economy as well as "better organization and management of migration and integration of those, who have come to our [German] society" are also set as priorities.

The document states that in cooperation with Russia it is possible to guarantee peace in Europe, integrity of national borders and sovereignty of all states on the basis of OSCE principles. The three German parties emphasized the "great potential for economic exchange and strong interest in cooperation in the field of civil society" in relations with Russia. Lifting European sanctions imposed on Russia in connection with the situation around Crimea and the conflict in the eastern part of Ukraine is envisaged in exchange for the implementation of the Minsk agreements.

The new German government stands for the full implementation of the Iranian nuclear deal, which is attacked by US President Donald Trump. The coalition agreement also expresses support for the sovereignty of Syria and Iraq.

Regarding relations with Turkey, the document says that opening new chapters in the negotiations on its accession to the European Union, as well as visa liberalization and expansion of the customs union can occur only after Ankara fulfills the necessary criteria.

Earlier on Monday, several briefings were held in Berlin, in which leaders of opposition parliamentary parties took part. They expressed their dissatisfaction with the text of the coalition agreement, which defines the main tasks for the government for the next four years.

"There is no deal in the agreement on introducing quotas for the reception of refugees, the lawlessness continues," Alexander Gauland, head of the parliamentary group of the Eurosceptic Alternative for Germany (AfD) party, said, adding that Merkel's policy on the issue in the past years "led to the split of the German society."

German Police Launch Inquiry Into Mosque Attack They Claim is Attempted Murder
The leader of the Free Democratic Party (FDP), Christian Lindner, said that "the coalition agreement has become obsolete," failing to meet new challenges, for example, the threat of a trade war with the United States, the upcoming tax reform and digitalization.

The head of the Greens Annalena Baerbock stated that the issues of combating climate change were also "missed" in the text of the agreement.

Merkel initially planned to form a coalition with the Greens and the FDP, but the preliminary talks with them were unsuccessful.