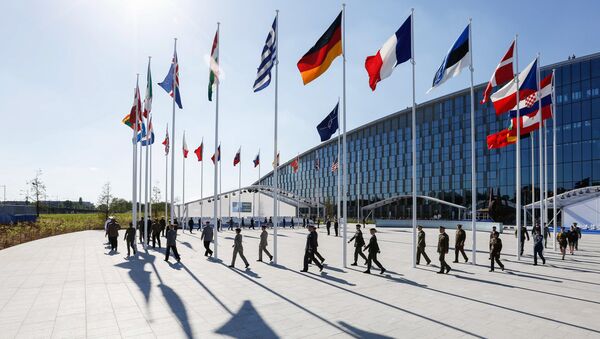 © Sputnik / Alexey Vitvitsky
/
Go to the mediabank
Subscribe
International
India
Africa
In an exclusive interview with Sputnik, Fabio Massimo Castaldo, a senior member of Italy's Five Star Movement and vice-president of the European Parliament, specifically commented on sending more than 100 Italian servicemen to Latvia as part of NATO's eastward expansion.

Commenting on Rome's decision to send 150 Italian soldiers to Latvia as part of NATO's eastward enlargement, Castaldo described it as an "erroneous move that we had repeatedly criticized during our parliamentary work, mainly at the national level."

He said that the decision adds to "the atmosphere of mistrust and the arms race, which in turn has led to the present stagnation in diplomatic activity."

"I think that we should instead focus on the gradual easing of tension, not least with the help of signals that we send as an Atlantic alliance, in the hope of restoring useful and constructive relations [with Russia]," Castaldo underscored.

He said that as far as the euro is concerned, the Five Star Movement's party position "remains critical."

"We are convinced that the Eurozone should be seriously reformed and that we should switch to a policy that could lead to growth aimed at creating jobs and transforming entire sectors of the economy that are currently threatened by globalization and automation," Castaldo said.

He warned that if "the EU is unable to meet these challenges and if it moves forward, seeking to compete in a downturn at the expense of workers' rights, it is clear that it distances itself from what was its mission."

Addressing major reforms within the Eurozone, Castaldo stressed that Italy will not be able to implement them on its own.

"It will be our concern to make our partners see us as a starting point for this reforms-related activity. If Germany continues to obstruct this process, motivated by its personal materialistic interests, it will certainly face consequences," he noted.

On the Italian General Election

Castaldo also warned that Italy faces the threat of unmanageability, blaming the country's former Prime Ministers Berlusconi and Renzi for hammering out a "crazy" law.

"Berlusconi's and Renzi's goal was to obtain a law that would prevent anyone from winning [the elections] in order to have a pretext for creating a government with the participation of the Democratic Party, Forza Italia and the centrists. The Italian people said 'no' to these palace maneuvers, which are absolutely far from the citizens' problems," he said.

How Russia Could Respond to NATO's Eastern Flank Military Build-Up
Castaldo added that people in Italy are waiting "in anticipation of what will be the reaction of various political forces" to the recent elections.

According to the results of the March 4 general election in Italy, the center-right coalition, consisting of Eurosceptic Lega Party, Forza Italia, Brothers of Italy and Us with Italy, won around 37 percent of the vote, while the anti-establishment Five Star Movement (M5S) received around 32 percent.

The views and opinions expressed by Fabio Massimo Castaldo are those of the speaker and do not necessarily reflect those of Sputnik.