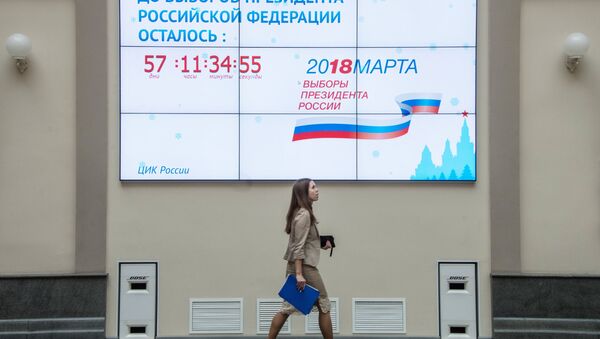 "We are already actively holding elections. Yesterday, a group of the consulate staff held early voting in Dallas, Texas. Before it, this week, on March 5 and 7, we held early voting in Colorado, on the outskirts of Denver and in Kansas City, Kansas. These were our very first elections in the United States," Pisarev said, adding that the upcoming presidential election will be the fourth one in this consular district.

Pisarev noted that Russian nationals could vote from 8 a.m. to 9 p.m. like it is done in Russia.

When asked about a turnout at the early voting, the consul general said that they usually compared a turnout with the previous elections, noting the 2016 elections to the Russian State Duma.

"In Colorado, the turnout was higher than in 2016. It's hard to say in Kansas City, we did not do early voting there in 2016, but there was also a great interest in the elections," he added.

Pisarev pointed out that the states of the Consulate General in San Francisco, closed by the United States, were redistributed between the missions in Seattle and Houston.

"Colorado, where we conducted the first early voting, used to be in the San Francisco consular district. So, we just went there and organized an early vote. In the other two states that moved to us from San Francisco’s district — Arizona and New Mexico — we did not conduct an early voting, since we do not have reliable information that there are places densely populated by Russian citizens who have the right to vote," he stressed.

"As for those states that were distributed to Seattle, as far as I know, they plan a series of early voting, including in Los Angeles and San Francisco," Pisarev added.

Pisarev underlined that the presidential election was taking place this year amid a very severe deterioration of relations between Russia and the United States.

"And this is not our fault. The elections are held at a time of a very strong Russophobic attitude to everything that is being done in our country. That’s why, we are very closely following how our early voting is held. I can say that it was held in a civilized way. I think that taking into account the current Russophobic psychosis in the US, this is already good," the consul general said.

The Russian Consulate General in Seattle plans to increase the number of off-site consular sessions for the Russian citizens because of the San Francisco diplomatic mission closure, Alexander Pisarev said.

"They [the Consulate General in Seattle] now want to increase a number of mobile sessions in order to deal with the wave that rose after the closure of the General Consulate in San Francisco. I would like to address our compatriots, especially those from California, so that they understand that the waiting times for their applications will apparently start increasing at our Consulate as well in the near future… We will think how to deal with this situation," Pisarev said.

The consul general noted that there were well-understood difficulties because of the diplomatic missions’ closure.

"For example, in the last few months, the number of issued visas has sharply increased. Previously, we had such a number of visas during the so-called season, which we usually have from April to September, now it started much earlier. The load almost doubled. Of course, understandably, this is due to the fact that one of the points disappears, and now the flow is distributed between four consular points in the United States," the diplomat said.

Pisarev went on to explain that the queue of Russian citizens who applied regarding their passports or matters of citizenship had increased in Seattle.

"Their waiting times reach, I believe, four or more months. Of course, they began to contact other consulates. The main flow went to us. This is a very difficult situation, because we are now starting to fail to manage it. In order to conduct certain consular actions, you need a certain amount of time. Therefore, while we are still managing, we already have a growing queue. We hope that we will not have such long times as in Seattle, but we also have them growing," he said.

Pisarev added that the US government gave very little time for the San Francisco personnel to leave, pack and transfer documents and equipment, so almost everything was taken to Seattle.

"There are still problems with obtaining the archive of consular registration for the three states — New Mexico, Arizona and Colorado, which now belong to the consular district of Houston. Our colleagues in Seattle are working hard, but it is not always physically possible. Some time has to pass. The work is ongoing," he noted.

"We have contacts only in case of any non-standard situations, but not on the regular basis. We do not maintain relations with local authorities in this regard. We would be happy to maintain such relations but the US local authorities, almost in all states, refuse, so to speak, to give us any information regularly about adopted children, situation in families," Pisarev said.

The consul general pointed out that over the past years, there had been no conflict situations concerning Russian children adopted by US citizens.

"Over the past years, we have record of no conflict situations within the consular district of Russia’s Consulate General in Houston related to violation of rights of adopted children," Pisarev stressed.

In October, Russian Presidential Commissioner for Children's Rights Anna Kuznetsova said Russia had not yet received a response from the United States to some 26,000 requests regarding the fate of Russian children adopted by US nationals.

US Businesses in Russia

US businesses are very interested in the Russian market, and the two-way information exchange is ongoing at the professional level, Russian Consul General in Houston Alexander Pisarev told Sputnik.

"The US businesses had and continue to have interest in Russia, and this interest is very considerable. At the professional level, there is a very powerful information exchange. The contacts remain maintained," Pisarev said.

Pisarev believes that Washington is doing everything to create a negative atmosphere for development of the bilateral cooperation with Moscow.

"For business, it is not necessary to prohibit something, it is enough to create a negative atmosphere, and this will have an impact," the diplomat added.

The consul general noted that there had recently been several successful visits of Russian delegations to Houston, including last October’s visit of head of Russia's Tatarstan Republic Rustam Minnikhanov, during which he had a number of meetings, showing great interest from the US side to various areas of cooperation.

Besides this, the delegation of the Association of Regional Agricultural Manufacturers of Russia (ARSP) for the first time took part in Houston Livestock and Rodeo where they had their own pavilion.