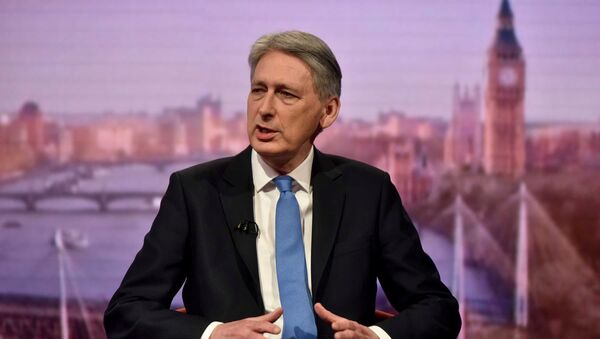 © REUTERS / Jeff Overs/BBC
Subscribe
UK Chancellor Philip Hammond has rejected allegations that anyone could laugh at London's reaction to the poisoning of former Russian intelligence officer Sergei Skripal in Britain.

The British Conservative Party is not going to pay back more than £820,000 ($1.1 million) in donations from Russian businessmen and their associates, according to UK Chancellor of the Exchequer Philip Hammond.

Speaking to the BBC, he cited "very strict rules" related to donations, which he said were "carefully vetted" and which could only come from British citizens.

"There are people in this country who are British citizens who are of Russian origin. I don't think we should taint them," Hammond pointed out.

Also, he made it plain that "nobody is laughing at us" when it comes to the case of the death of Russian security agent Alexander Litvinenko in the UK in 2006 and this month's alleged poisoning of former Russian intelligence officer Sergei Skripal there.

Hammond's remarks came shortly after Litvinenko's widow Marina urged the Conservative Party to hand back the cash of Russian businessmen and their associates who have reportedly registered their hefty donations to the Tories since the summer of 2016.

In an interview with the Sunday Times, she said that "these donations are not just from the heart and for charitable reasons; they are all calculated."