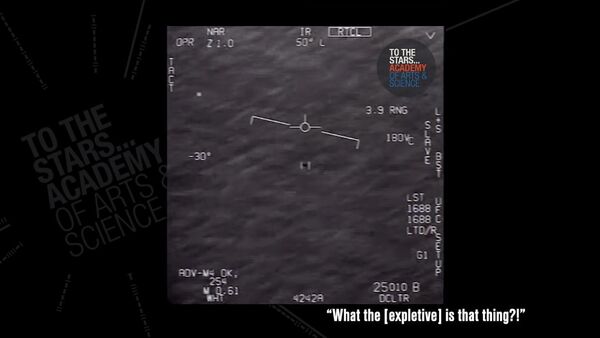 In 2015, the pilots of an American warplane reportedly managed to capture footage of a mysterious object which was flying swiftly off the US East Coast at an altitude of 7,500 meters.

The analytical company To the Stars Academy of Arts and Science has published a new video which allegedly shows US Air Force aircraft monitoring an unidentified flying object.

In the video, an alleged unidentified oval object, which has "no obvious wings or tails", is seen moving at high speed "very low" above the ocean surface, the Stars Academy of Arts and Science website reported.

The pilots' voice conversation indicates that the  Weapon Systems Operator (WSO) managed to capture the object only on the third attempt and that the WSO "expresses excitement" about all this.

Between 2007 and 2012, the Pentagon's Advanced Aviation Threat Identification Program collected video and audio recordings of reported UFO sightings, including footage from a Navy F/A-18 Hornet fighter jet which was reportedly made in 2004 but published only late last year.

The video shows US fighters unsuccessfully trying to intercept what looks like a rotating UFO that moves faster than any US Air Force aircraft.

In December 2017, the New York Times reported that even though the Pentagon shut down a hush-hush, $22 million, program to study UFOs in 2012, it continues to investigate related episodes brought to its attention by service members.