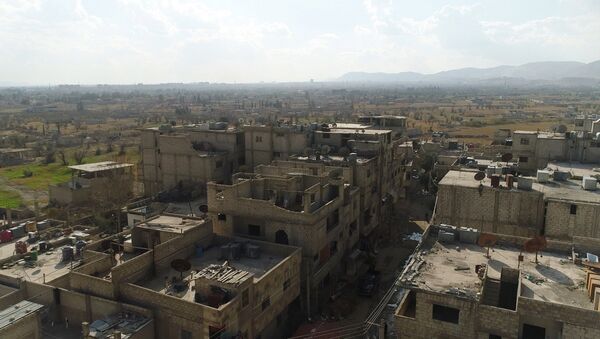 © Sputnik / Mikhail Alayeddin
/
Go to the mediabank
Subscribe
International
India
Africa
EASTERN GHOUTA (Syria) (Sputnik) - Russian and Syrian military are further negotiating with militants in Eastern Ghouta calling on them to let the civilians flee the area and leave it themselves with safety guaranteed, the Russian Defense Ministry's center for Syrian reconciliation said Sunday.

"Russian Center for reconciliation of opposing sides in Syria and Syrian army are further holding negotiations with members of outlawed armed groups in Eastern Ghouta on the exit of the civilians from the area. The militants are considering letting several dozens of residents leave the area in exchange for free exit together with their families with guaranteed safety," the spokesman for the Russian center for Syrian reconciliation Maj. Gen. Vladimir Zolotukhin told reporters.

The spokesman again called on the militants to leave the area and let the civilians to do so stressing that the safety would be guaranteed.

E Ghouta Militants Plan to Stage Chemical Attack to Blame Gov't - Damascus
On March 10, the spokesman for the Russian Center for Syrian reconciliation announced that the center was holding talks with the leaders of the illegal armed units on the withdrawal of the second group of militants from the Damascus' suburb of Eastern Ghouta.

On Friday, 13 militants left the area via a humanitarian corridor in accordance with the agreement reached owing to the reconciliation center, after which they had been sent to Idlib.

Eastern Ghouta was taken by militants in 2012. According to Syrian Army estimates, there are 10,000-12,000 militants in the region. Despite the recent UN resolution, the combat has not ended, even when the humanitarian pause was in place, the Russian Defense Ministry's center for Syrian reconciliation said. As militants constantly target all exits from the enclave, civilians have been unable to leave the area.