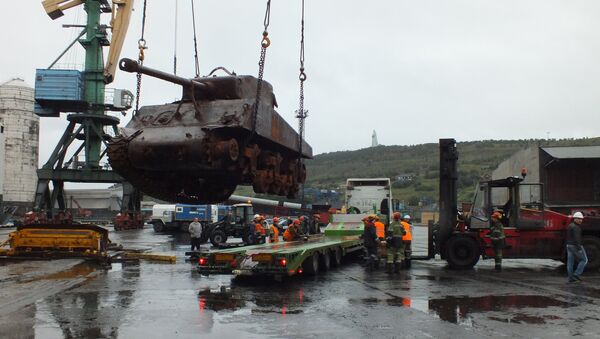 According to restoration specialists, the tank, which has been stuck at the bottom of the sea in Kola Bay for over 70 years, has remained reasonably well-preserved, and can be expected to be repaired, restored, and put on public display for this year's Victory Day celebrations.

The US-built M4 Sherman medium tank, found on the USS Thomas Donaldson, a transport ship sunk by a Nazi German submarine's torpedo on its approach to Murmansk on March 20, 1945, has been recovered and taken to the Western Military District's logistics support brigade center in Leningrad region, a military spokesman has confirmed.

After being restored, the vehicle will be put on display in St. Petersburg for the 73rd anniversary of Victory Day on May 9. 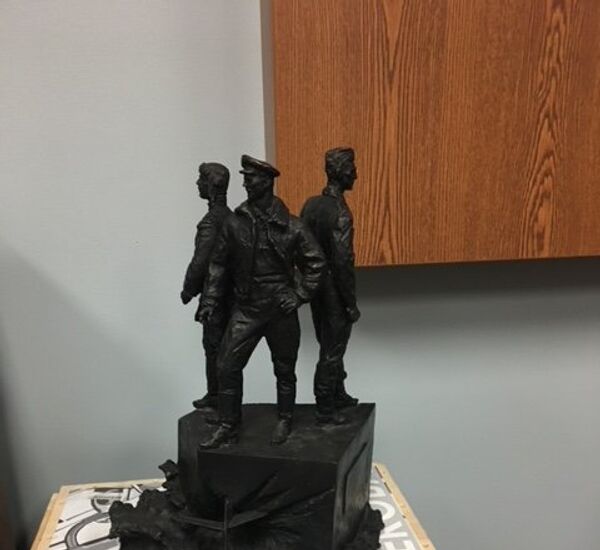 Elizabeth City Struggles With Decision to Establish Lend-Lease Monument
Russian dredgers have been working on recovering the cargo from the USS Thomas Donaldson for about two years. After being hit by the Nazi torpedo, the 132-meter long transport slowly broke apart into three parts, sinking to its icy grave together with its cargo of tanks, anti-aircraft guns, vehicles, boats engines, steamrollers, locomotives, and other equipment. One officer and three crew members perished in the torpedo attack, while the rest of its 68 officers and crew were rescued.

The USS Thomas Donaldson was first discovered 13 years ago; the wreckage was found lying about 55 meters deep in Russian territorial waters near Kildin Island. Over the past two years, divers have been on a mission to recover its cargo and bring it to shore for restoration. Last year, the Navy recovered three Shermans and four pieces of industrial equipment. The military hardware has since been donated to the St. Petersburg Artillery Museum, the Northern Maritime Museum in Arkhangelsk and the Air Force Museum in Safonovo, Murmansk region.

Russia
Russian Military ‘Captures’ US Sherman Tank, Saves It From Watery Grave
During WWII, the United States, Canada and the United Kingdom delivered millions of tons of weapons, vehicles, food aid, oil and other crucial assistance to the northern ports of the Soviet Union, mainly Murmansk and Arkhangelsk, as part of the united Allied war effort against Nazi Germany and its allies. An estimated 1,400 Allied vessels delivered supplies via the Arctic convoy route during the war, with Allied seamen risking death at the hands of Nazi U-boats and warplanes.

Between mid-1941 and May 1945, the Western Allies lost 85 supply ships and 16 Royal Navy escort vessels, with as many as 3,000 sailors perishing in the effort to deliver the aid to their wartime Soviet allies.