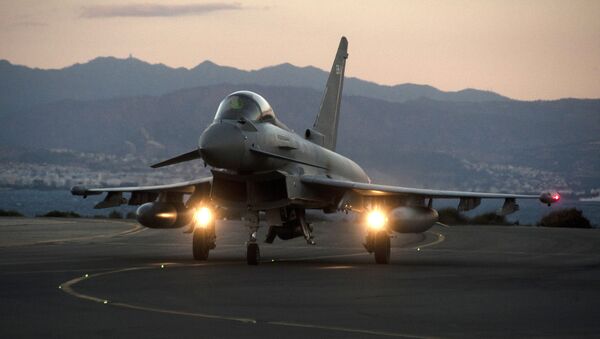 © AFP 2023 / IAKOVOS HATZISTAVROU
Subscribe
International
India
Africa
As Britain and Saudi Arabia are building up their bilateral trade and investment cooperation, defense and security cooperation remains one of their top concerns.

Riyadh and London have decided to finalize a multi-billion-dollar contract for the sale of 48 Typhoon fighter jets to the Persian Gulf state.

The preliminary agreement to move forward the long-running talks on the sale of the Eurofighter Typhoons came at the end of a three-day visit to Britain by Saudi Crown Prince Mohammed bin Salman.

Eurofighter Completes Flight Trials on New Typhoon Enhancements
The deal has been under discussion for years, but was snagged over the sides’ disagreement over the place of the jets’ production, with Riyadh wishing to have the jets partially assembled in Saudi Arabia.

Completion of the deal would come as a major boost for Britain’s combat air industry just weeks after the government announced plans to conduct an industrial strategy review of the sector.

“We have taken a vital step towards finalizing another order for Typhoon jets that will increase security in the Middle East and boost British industry and jobs,” UK Defense Secretary Gavin Williamson said.

Saudi Arabia currently operates 72 Typhoons from a first batch of jets ordered in 2007. The final jets from that order were delivered in the first half of last year.

The British government is defending the sale of the planes to Saudi Arabia amid growing pressure to completely halt arms exports to Saudi Arabia with critics warning it will strengthen Riyadh’s hand in its ongoing military campaign in Yemen.

During Wednesday’s parliamentary debate on the issue, Prime Minister Theresa May underscored her government’s support for the Saudi-led military campaign in Yemen, which she said has been supported by the UN Security Council.

Theresa May and her government have also been taking flak from the opposition for signing a hefty, $138-million, aid deal with Saudi Arabia, purportedly to create infrastructure in poor countries just as Riyadh’s military operation in Yemen has been blamed for pushing the impoverished country in a humanitarian crisis, the Press TV wrote.

The government has defended the controversial deal as a “new long-term partnership” to promote economic development in some of the world’s poorest countries.

Saudi Arabia is leading a coalition of nine African and Middle Eastern countries in a military operation in Yemen in a bid to reinstall the internationally-recognized government of President Abdrabbuh Mansur Hadi.