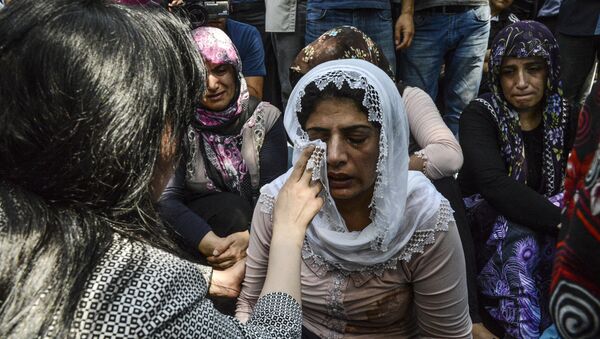 A United Nations official has emphasized the need to be sure that survivors of conflict-related sexual violence in Iraq are fully protected and that the perpetrators are brought to justice.

"I heard first-hand the heart-wrenching accounts of survivors of Daesh* sexual violence. Many of the women who remain displaced expressed serious safety concerns regarding their return to their homes due to activity from different militia groups and the reported presence of former Daesh combatants within their community. Sunni women, in particular, shared their fear of reprisals on account of an incorrect perception of being affiliated with Daesh," Pramila Patten, the Special Representative of the Secretary-General on Sexual Violence in Conflict told journalists at UN Headquarters in New York.

"Women human rights defenders deserve our solidarity and resolve to protect them." — Pramila Patten, SRSG on Sexual Violence in Conflict.

In February-March 2018 a United Nations official visited Sudan and Iraq, where thousands of women and girls have suffered at the hands of Daesh terrorists. Ms. Patten described the situation of survivors who have returned home with children fathered by terrorists as "extremely disturbing."

"While some religious leaders may show some empathy, the tribal leaders display a profound reluctance to accept children born of rape. And I was informed by the provincial authorities of Mosul of the setup of different orphanages with thousands of children," she said.

Despite the improved security situation, Ms. Patten said talks with displaced women and girls in two camps in Darfur revealed how precarious things are there.

"I learned that the women and girls are especially at risk of sexual violence when they step out of the camps, especially to pursue their livelihood activities," she said.

Patten said she also communicated to government officials a clear message from survivors to step up efforts to free those still in captivity and find the missing.

During a lightning invasion in June 2014, Daesh fighters took over Iraq's second-largest city, Mosul, and nearly a third of the country, pushing it into the most severe crisis since the US-led invasion in 2003. Mosul was freed last July, and Prime Minister Haider al-Abadi announced an end to Daesh's self-styled caliphate.