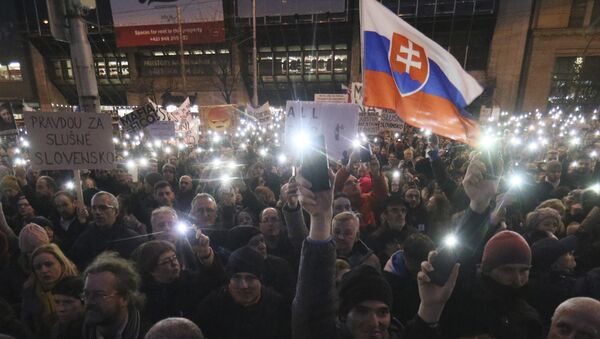 Large-scale protests have taken place in Bratislava following the murder of a journalist and his fiance after an exhaustive report was published detailing links between top Slovakian lawmakers and organized crime.

Following the murder of Slovakian journalist Ján Kuciak and his fiancee, large-scale demonstrations have erupted in Bratislava and other towns demanding the resignation of the current government.

A carefully-researched study describing the close working relationship between Slovakia's top leaders and influential organized crime bosses resulted in the death of the investigative journalist who authored the report according to local press, and Slovakians, shocked by the violence, have demonstrated en masse in the streets of urban regions across the country.

According to estimates on the ground, some 50,000 marched in the nation's capital on Friday, demanding that Prime Minister Robert Fico and his cabinet resign.

Slovakians have reacted strongly to the gun killings of Kuciak and his fiancee, Martina Kušnírová, both 27, after the two were found shot to death inside their home on the outskirts of Bratislava on February 25.

The summary details allegations of criminal activity between people associated with Italian organized crime group 'Ndrangheta, and members of Bratislava's political elite, according to The Guardian.

Kuciak's study, The Model, the Mafia and the Murderers, was also released on the Czech Centre for Investigative Journalism (CCIJ) website, as well as Investigative Reporting Project Italy.

Initial police reports suggested that the journalist's killing was "most likely" related to his ongoing investigation into ties between Slovakia's top leaders and several members of the Italian organized crime cabal.

Although local law enforcement officials warned that demonstrations could erupt in violence, there were no reports of vandalism or arrests for disruptive behavior.

Local media in Bratislava described the Friday protests as the largest since the 1989 Velvet revolution that saw the resignation of the entire top level of the one-party communist government in the former Czechoslovakia.

While large numbers marched in Bratislava and other Slovak cities, additional protests were noted in other European cities.