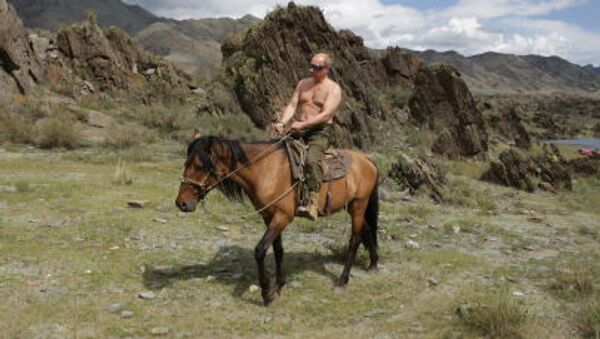 The images of Russian President Vladimir Putin riding a bear while shirtless have already become iconic, flooding social media, with many wondering if they are real.

In an interview with NBC, journalist Megyn Kelly asked President Putin what he thought about the topless pictures of him while he’s on vacation.

“I’m relaxing. There are many photos of me at work, but no one cares about them. I’ve seen the pictures of me riding a bear, but I never did it. But such images do exist,” Putin replied.

In addition, President Putin shared the story of his work in the intelligence services, saying that such experience helped him when he shifted to the civilian sphere to communicate with people. He also revealed that while working as the deputy mayor of St. Petersburg and being in charge of international contacts, he met with Henry Kissinger for the first time.

Meanwhile, President Putin found it difficult to say whether the experience gained in the secret services gave him any advantage over his counterparts.

“It’s hard to say. I have no other experience. The only thing I know is that my partners, heads of states, governments, are exceptionally outstanding people. They went through a huge selection and were chosen. There are no occasional people at this level, and each of them has their own advantages over others,” he added.