From athletes and women in shoulder boards to famous actresses Blanca Blanco and Marion Cotillard: we've got this week's most striking images lined up for you in Sputnik's photo gallery.

From the beginning of March and International Women's Day, take a moment to soak up some of the most important and striking visuals captured by photographers around the world. 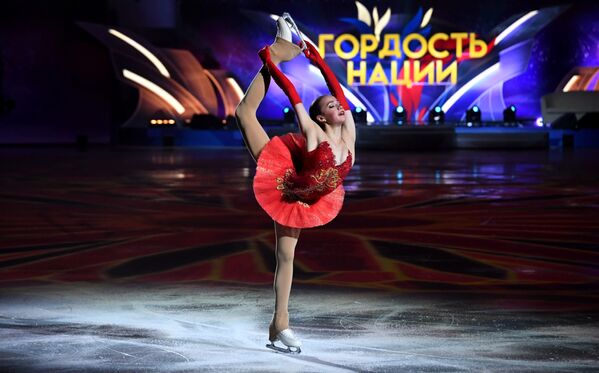 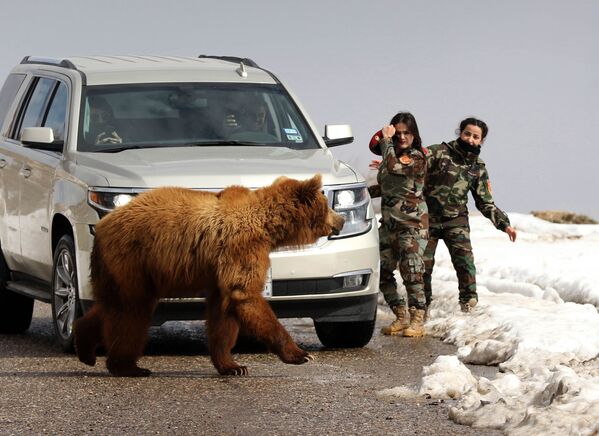 2/30
© AFP 2022 / Safin Hamed
Female Iraqi Kurdish peshmerga fighters and journalists watch on as they release a bear into the wild in the Gara Mountains near the northern Iraqi city of Dohuk on March 4, 2018, after Iraqi Kurdish Animal rights activists from a local NGO rescued it from a private home. 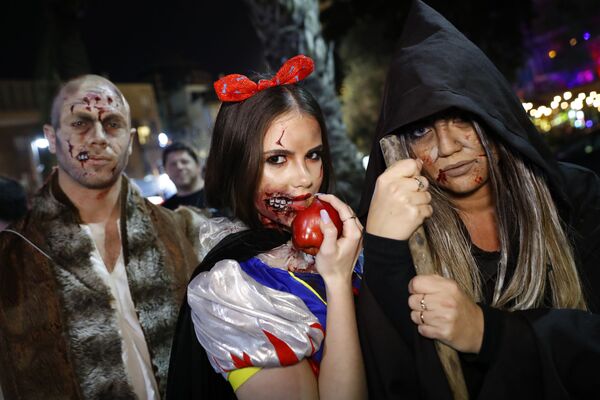 3/30
© AFP 2022 / Jack Guez
People wearing costumes and face paint pose as they take part in a "Zombie walk" in Tel Aviv as part of the Jewish holiday of Purim on March 3, 2018.
The carnival-like Purim holiday is celebrated with parades and costume parties to commemorate the deliverance of the Jewish people from a plot to exterminate them in the ancient Persian empire 2,500 years ago, as described in the Book of Esther. 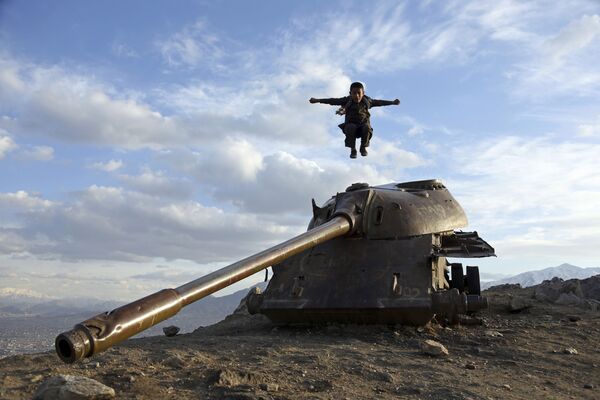 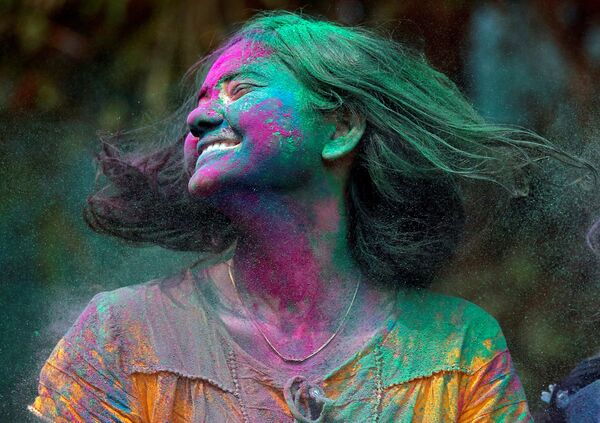 5/30
© REUTERS / Francis Mascarenhas
A woman smeared with coloured powder shakes her head to remove it during Holi celebrations in Mumbai, India. 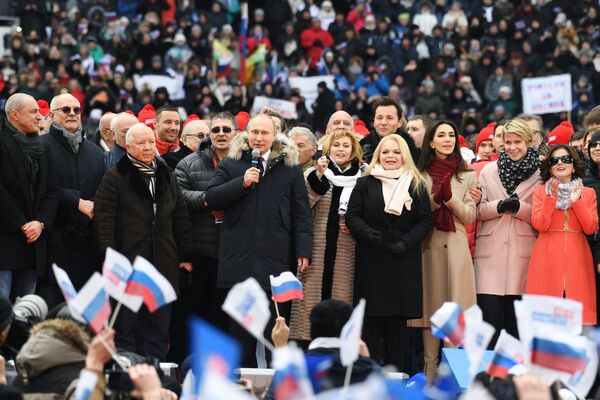 6/30
© Sputnik / Grigoriy Sisoev
/
Go to the photo bank
Сandidate for the presidency in Russia, Vladimir Putin at a rally/concert "For a Strong Russia" in the Luzhniki Stadium. 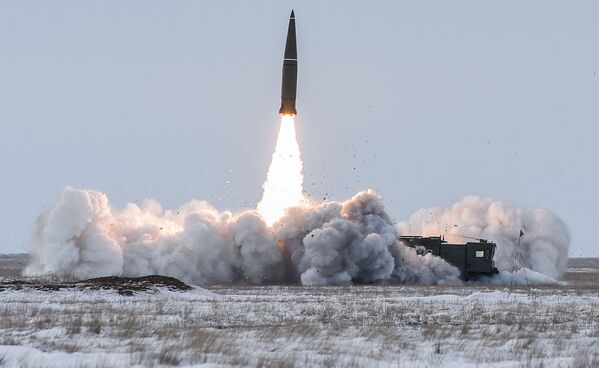 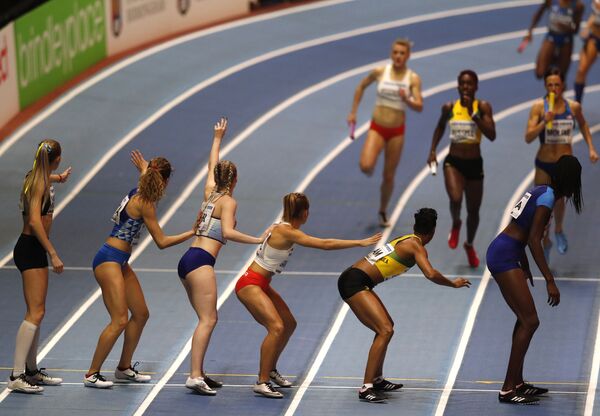 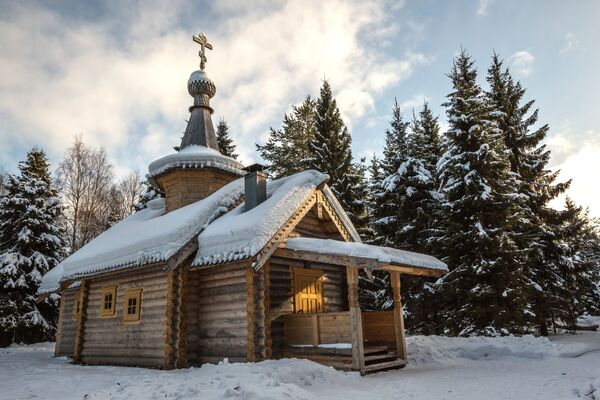 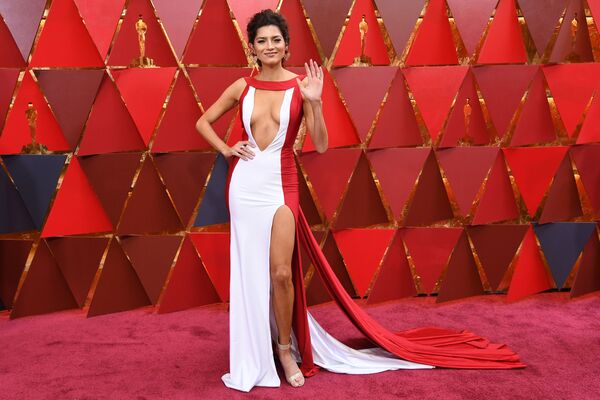 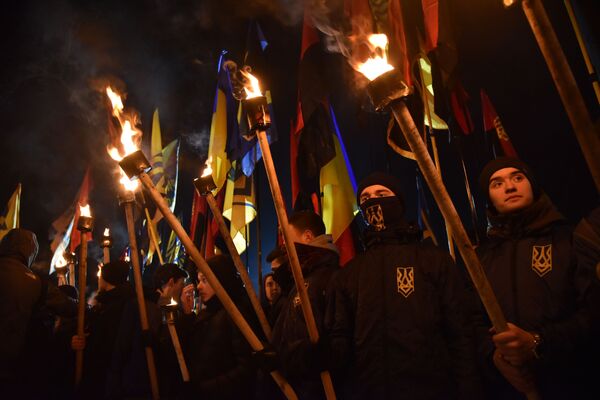 11/30
© Sputnik / Stringer
/
Go to the photo bank
Members of nationalist parties participate in a torchlight procession arranged to coincide with the anniversary of Ukrainian Insurgent Army General Roman-Taras Yosypovych Shukhevych's death on March 5, 1950 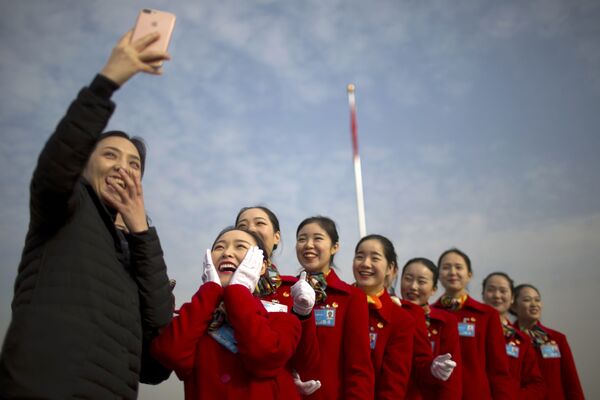 12/30
© AP Photo / Mark Schiefelbein
Hospitality staff members react after posing for a selfie during the opening session of China's National People's Congress (NPC) at the Great Hall of the People in Beijing, Monday, March 5, 2018. China's government pledged Monday to deliver robust growth, pursue advanced technology and boost military spending while urging the public to embrace President Xi Jinping's rule as its ceremonial legislature prepared for changes to allow him to stay in power indefinitely. 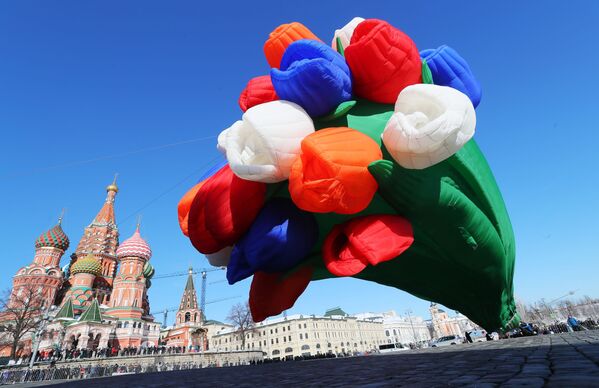 13/30
© Sputnik / Vitaliy Belousov
/
Go to the photo bank
An air balloon shaped as a bunch of tulips drifts over Vasilyevsky Spusk Square, Moscow 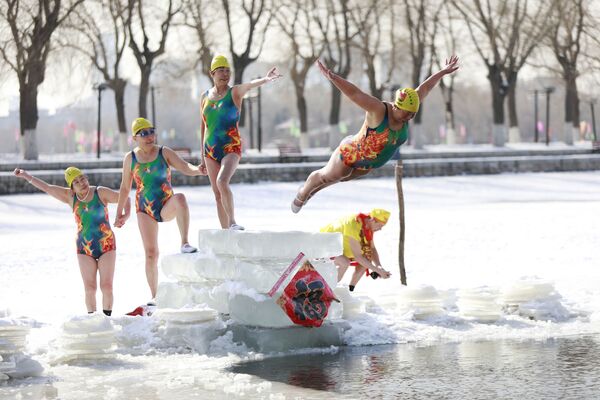 14/30
© AFP 2022
A woman dives into a partly frozen lake in Shenyang in China's northeastern Liaoning province. 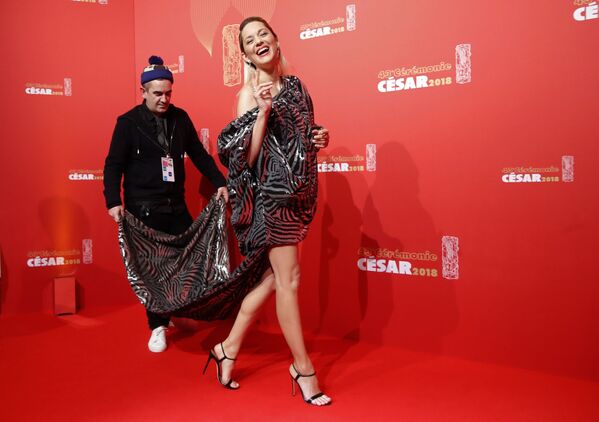 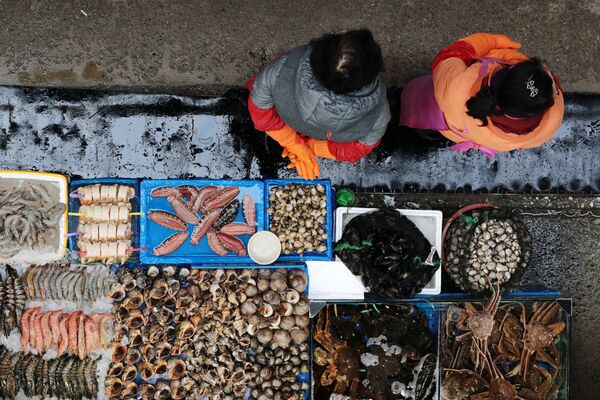 16/30
© Sputnik / Maria Plotnikova
/
Go to the photo bank
A fish counter in a fish market in Seoul. 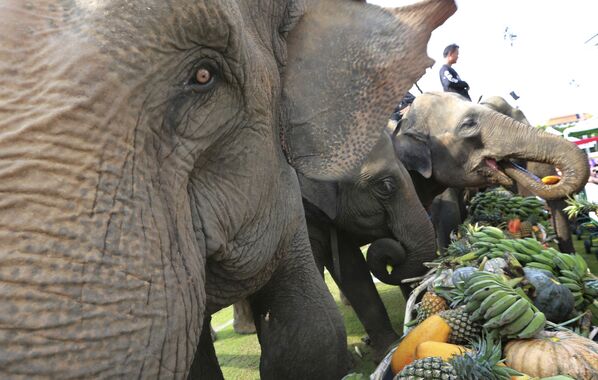 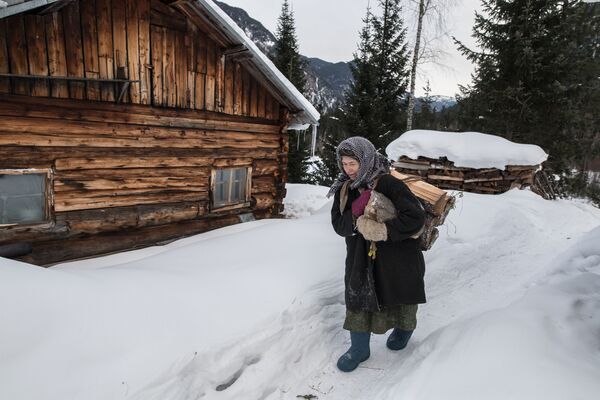 18/30
© Sputnik / Iliya Pitalev
/
Go to the photo bank
Anchoress from an Old Believer's family Agafia Lykova goes with a cord of wood to her hunter's cabin. She has been living in the Sayan taiga for 30 years. Geologists found the family in 1978. 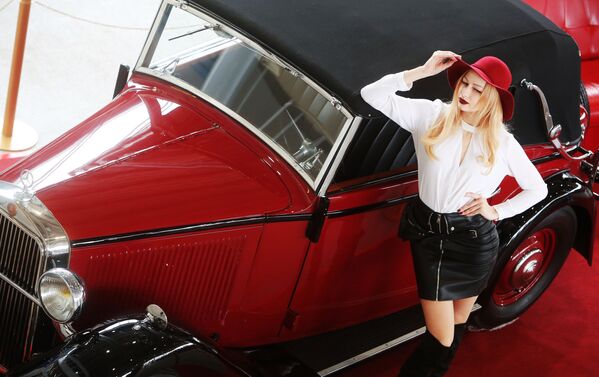 19/30
© Sputnik / Iliya Pitalev
/
Go to the photo bank
A girl taking a photo by a car that is part of the special exhibition,
100th anniversary of the USSR fire protection service at the 27th exhibition of antique cars "Oldtimer-Gallery" in Moscow's Sokolniki Culture and Exhibition Center. 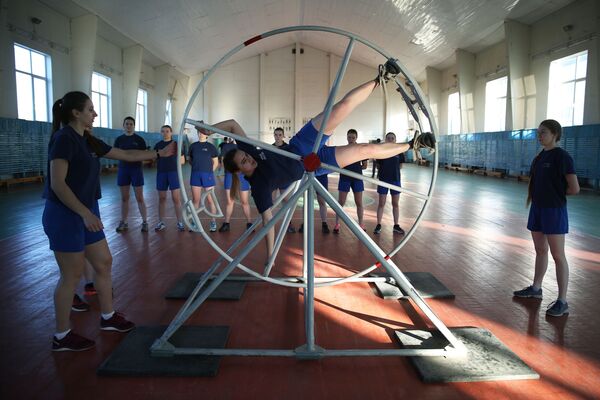 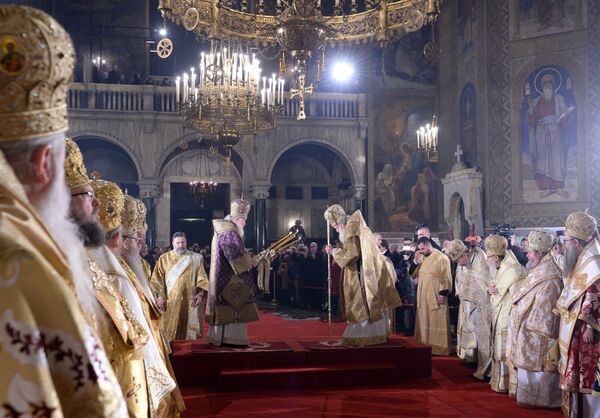 21/30
© Sputnik / Sergey Pyatakov
/
Go to the photo bank
Patriarch Kirill of Moscow and All Russia and Patriarch Neophyte of Bulgaria, Metropolitan of Sophia during a divine liturgy in the Cathedral of Prince Alexander Nevsky in Sofia. 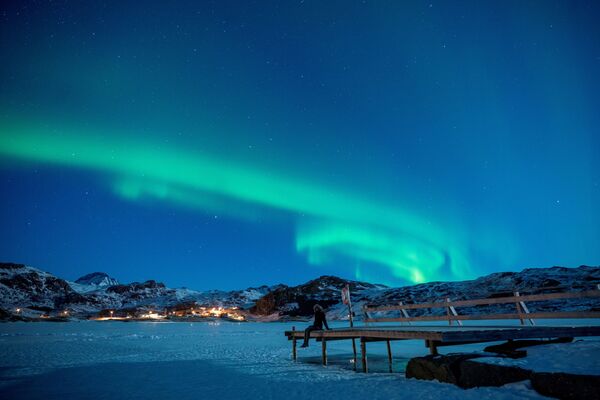 22/30
© AFP 2022 / Olivier Morin
A woman sits on a pier on March 3, 2018 to watch northern lights (Aurora borealis), on the Lofoten Islands in Bostad, inside the arctic circle in northern Norway. 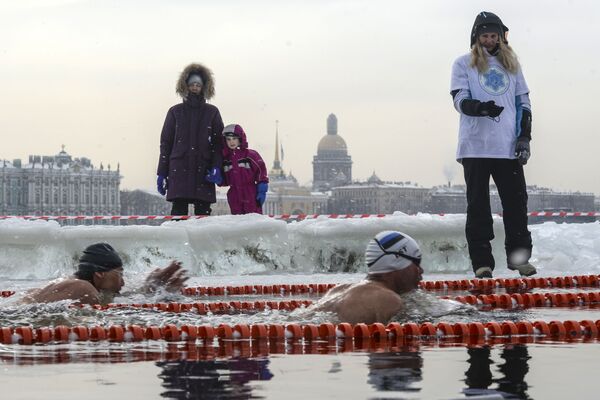 23/30
© Sputnik / Alexander Galperin
/
Go to the photo bank
Participants during the winter swimming competition "The Great Neva Cup 2018" on the beach of the Peter and Paul Fortress in St. Petersburg. 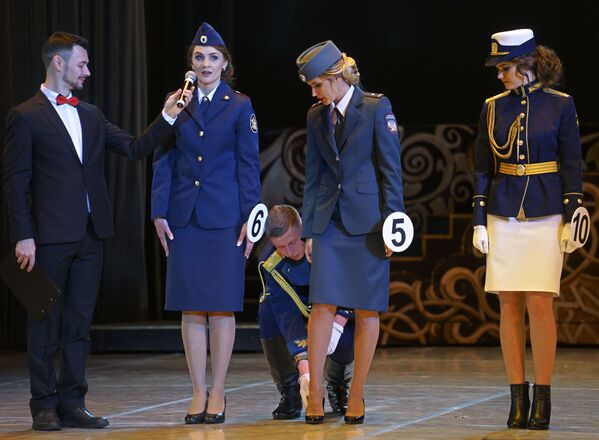 24/30
© Sputnik / Nikolay Hiznyak
/
Go to the photo bank
Participants of the fifth annual competition "Beauty in shoulder boards" before the start of the competitive program. 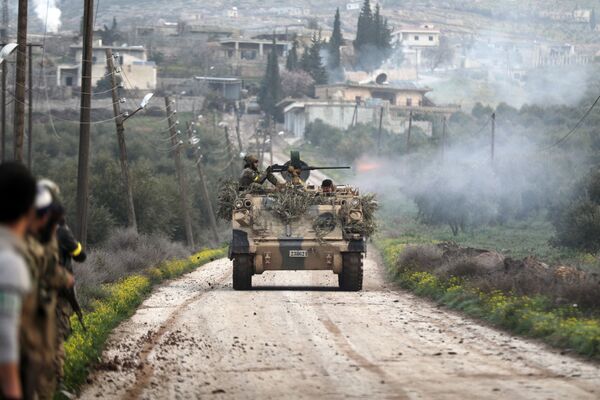 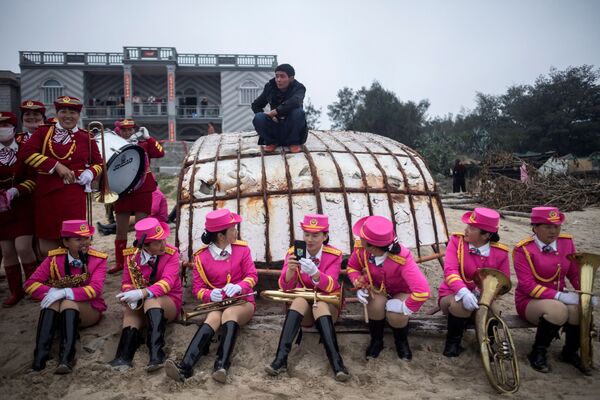 26/30
© AFP 2022 / Johannes Eisele
This picture taken on March 5, 2018 shows a marching band taking a break during a procession next to a shipwreck on the beach of the village Fuye on Nanri island in China's Fujian province.
"Possessed" by local gods, elaborately dressed villagers in a fishing community in eastern China are carried into the surf to ensure an abundant catch, a centuries-old rite needed now more than ever as fish stocks decline. Staged in the village of Fuye on Nanri island, "The Dash of the Ocean Gods" festival is one of many visually striking traditional rituals held in Fujian province in the weeks following the Lunar New Year, which this year fell on February 16, 2018. 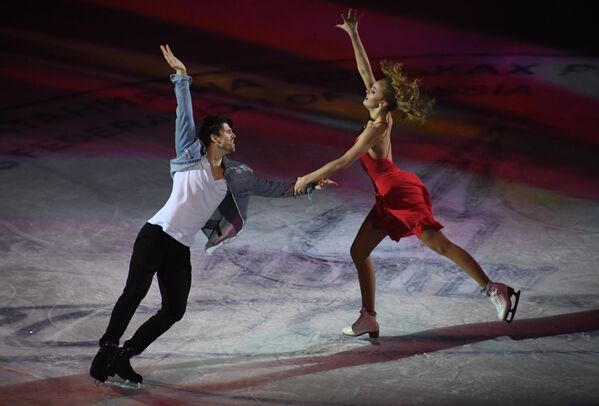 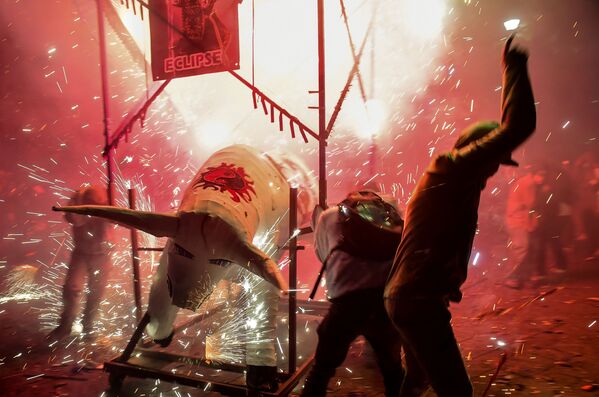 28/30
© AFP 2022 / Ronaldo Schemidt
People shelter from fireworks before the traditional "torito" (little bull) made of paper, wood and fireworks during celebrations of San Juan de Dios in Tultepec on the outskirts of Mexico City, March 8, 2018. 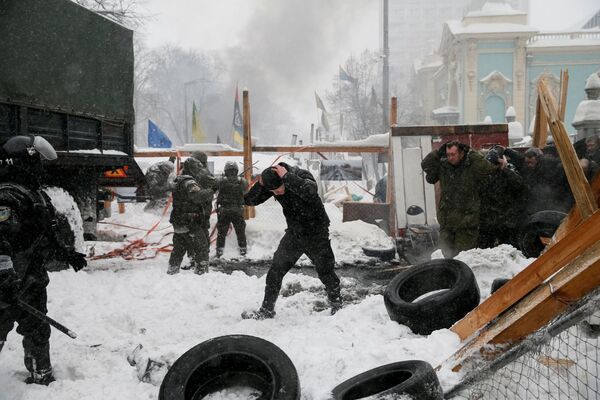 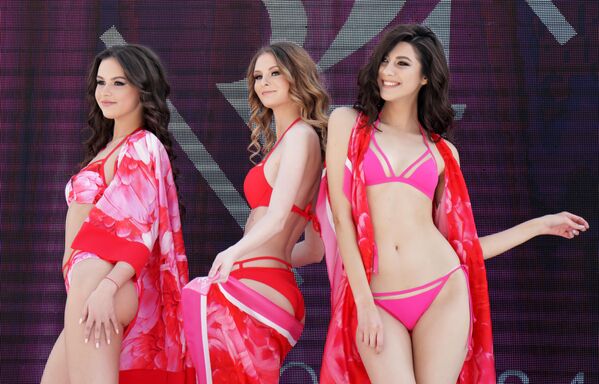 30/30
© AFP 2022 / Anwar Amro
Models present creations during a lingerie fashion show, which is part of the Ski and Fashion festival 2018, in the Lebanese ski resort of Faraya, north of Beirut, on March 4, 2018.
Newsfeed
0
Access to the chat has been blocked for violating the rules . You will be able to participate again through:∞. If you do not agree with the blocking, please use the feedback form
The discussion is closed. You can participate in the discussion within 24 hours after the publication of the article.
To participate in the discussion
log in or register
loader
Chats
Заголовок открываемого материала