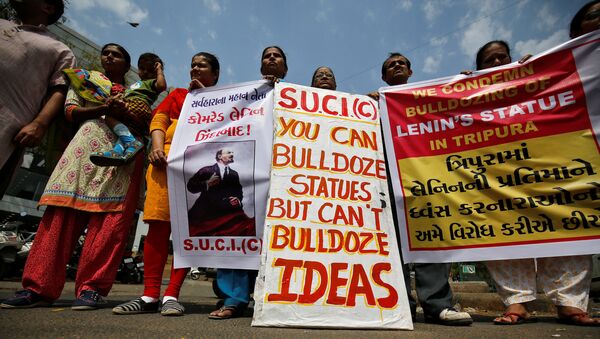 The "statue war" in India was triggered after the razing of the monument to Communist icon Vladimir Lenin in Tripura earlier this week. The act set off a spate of violence and vandalism across the country of statues to other social and political icons on Tuesday and Wednesday.

New Delhi (Sputnik): The situation in different parts of India became volatile after a statue of Vladimir Lenin was toppled on Monday following which a statue of Dravidian reformist, E V Ramasamy was damaged the next day.

In Tripura the Bhartiya Janata Party (BJP), which is currently in power in Delhi with Prime Minister Narendra Modi as its head, defeated the ruling Communist Party in the recently concluded state elections. Both the BJP and Communist Party blamed each other for the fiasco.

Acts of vandalism have been reported in the states of Uttar Pradesh, Tamil Nadu, and West Bengal. A statue of social reformer E V Ramasamy, popularly known as "Periyar," was vandalized in Tamil Nadu's Vellore and in retaliation, a mob desecrated BJP's founder Shyama Prasad Mookerjee's statue in the city of Kolkata in opposition-ruled West Bengal. A statue of B.R. Ambedkar, the Dalit icon who played a pivotal role in the drafting of the Indian constitution was also vandalized in BJP-governed Uttar Pradesh.

The Indian Ministry of Home affairs Home on Wednesday had to issue an advisory to the states to stop statue vandalism and Prime Minister Narendra Modi's office condemned the incidents.

"Persons indulging in such acts must be sternly dealt with and booked under relevant provisions of the law," a statement from prime minister's office read.

There were urgent calls from cross-sections of Indian society to stop the statue vandalism, however social activists say that Indian society remains divided over caste issues and this leads to such incidents on the slightest pretext.

I break lenin statue in tripura; u break Shyama Mukherjee statue in kolkatta; I break Savarkar statue; u break Nehru. This never ending chain is wht Gandhiji had in mind when he said-“ eye for eye & whole world wl be blind”. Much maligned & much ignored “liberalism” need of hr.

"It is not surprising in India for such incidents to trigger unrest. Although things seem very calm on the surface, society is highly fragmented along caste lines and Gandhi was very particular that no dispute can be solved by violence. The recent incidents are symptomatic of the government and the society straying away from the ideals of Mahatma Gandhi," Professor T K Thomas, renowned Gandhian, and writer told Sputnik.