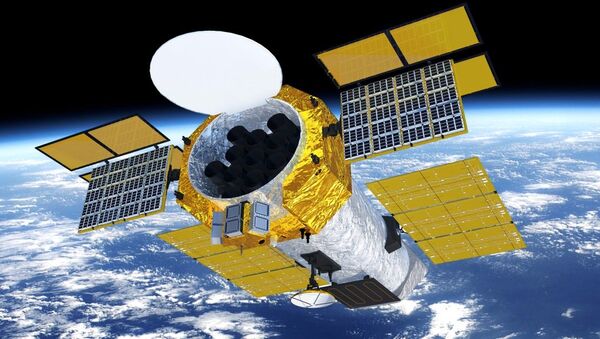 © Chinese Academy of Sciences - Institute of High Energy Physics
Subscribe
The Chinese push to be a top player in space continues, as the Chinese Academy of Sciences (CAS) has announced that it will begin work on the cutting edge enhanced X-ray Timing and Polarimetry (eXTP) satellite, intending to finish the project and launch the satellite in 2025.

The principal investigator of the eXTP is Zhang Shuangnan of the CAS' Institute of High Energy Physics. "Since we have developed excellent technology and talent in X-ray astronomy, it's highly possible that we can take a leading role in this field if we keep pursuing it with more advanced detection instruments," Zhang said in a Wednesday statement.

"The research will eventually contribute to the solving of major scientific questions such as what happens around black holes? What do quantum fluctuations in vacuum state generate? And, what is the state of matter inside neutron stars?" Zhang added.

While CAS would lead the project and provide two-thirds of the funding, over a dozen other countries would also be involved — mostly European countries and the European Space Agency. All told, the satellite is expected to cost about 4.5 billion yuan ($711 million), making it the most expensive Chinese space science project ever approved.

X-ray astronomy is essentially impossible from the surface of the Earth because X-radiation is absorbed by the planet's atmosphere. The biggest sources of X-radiation in space are objects with extremely high gravity, such as black holes in neutron stars. Because they're difficult to study, little is known about such extreme objets.

eXTP would be the most advanced X-ray space observatory ever built, with a mission to study black holes, neutron stars, and quarks, the tiny fundamental particles. The eXTP can also study gravitational waves, mysterious disturbances in the fabric of spacetime, as well as the effects of extreme conditions like extraordinarily high gravity or density on quantum physics.

This would be accomplished with a cutting edge large-area spectroscope and an improved telescope with a wide field monitor.

These improvements would give the eXTP the edge over many existing X-ray satellites, including the Chinese Hard X-ray Modulation Telescope (HXMT) Insight that CAS launched in June. At the time, Beijing bragged that HXMT was the most advanced hard X-ray astronomy satellite ever launched.

Hard X-rays are X-rays in the upper end of the energy band, emitting from sources like magnetic fields, the interiors of pulsars (small stars with extremely powerful magnetic charges) and recently formed black holes.

Zhang also led the development of HXMT. "We are looking forward to discovering new activities of black holes and studying the state of neutron stars under extreme gravity and density conditions, and physical laws under extreme magnetic fields," he told Xinhua back in June.

HXMT was China's first satellite, and it began science operations at the end of January after months of calibrating. It is the first of three phases of Chinese high-energy astrophysics observation. eXTP is the second, with the third stage consisting of two satellites: Hot Universe Baryon Survey, scheduled for a 2030 launch, and the Space Cosmic Microwave Background Polarimetry Telescope, scheduled for a 2036 launch.

China also intends to land rovers on the moon and Mars as well as to set up permanent orbiting space stations around Earth.