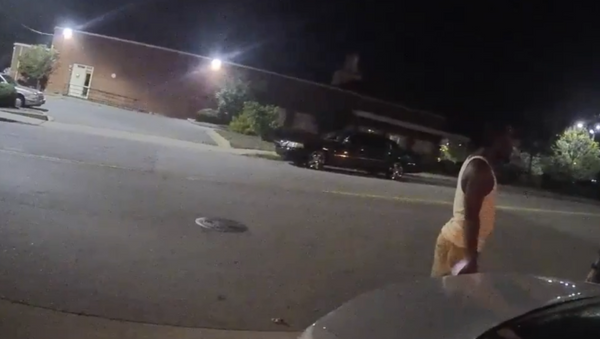 The former officer, Christopher Hickman, was charged with assault by strangulation, assault inflicting serious injury and communicating threats for the August 2017 altercation. Hickman was initially suspected of simple assault.

Following the announcement, the Asheville City Council released a statement noting that the charges would give way to "structural changes" needed to prevent similar events from happening in the future.

"Like you, we are angry. We are angry that a black man walking home from a long day at work was stopped for jaywalking — something most of us do regularly without consequence," the statement reads. "We are angry that Johnnie Rush was attacked, beaten, choked and tased by a white police officer in violation of city policy and common decency."

"We are angry that, even with all the efforts to improve relationships between the police and the community, even with an improved Use of Force policy, this could still happen here. And we are furious that no one thought that we — Asheville's elected leaders — needed to know about this incident."

The statement added that the city council would be calling for an audit of the Asheville Police Department and the staff's decision-making process related to its failure in notifying council members about the incident.

"It is clear that, we, as a city, made mistakes. We acknowledge this, apologize and ask for the public's support as we identify and implement the changes required to help us put better practices in place and move forward," it added. "We can be better. Indeed, we must be better. And we will — with your help, input and support."

Prior to the Thursday announcement, the City of Asheville had filed a petition to have the body camera footage released. After obtaining clips of the recording they determined that it showed "clearly excessive" force was used during the arrest, Fox Carolina reported.

Hickman's charges stem from an August 24, 2017, incident in which he, along with then officer-in-training Verino Ruggiero, approached Johnnie Jermaine Rush for jaywalking. After Rush told both officers that they were harassing him, Hickman took it upon himself to punch and tase Rush despite already having him restrained and on the ground.

Asheville Police Chief Tammy Hooper ultimately placed Hickman on desk duty before he opted to resign from the force in January 2018 after an internal investigation concluded that he should be fired, according to reports.

The FBI is also conducting its own investigation of the incident. Hickman made his first court appearance on Friday. His next court date is in April.