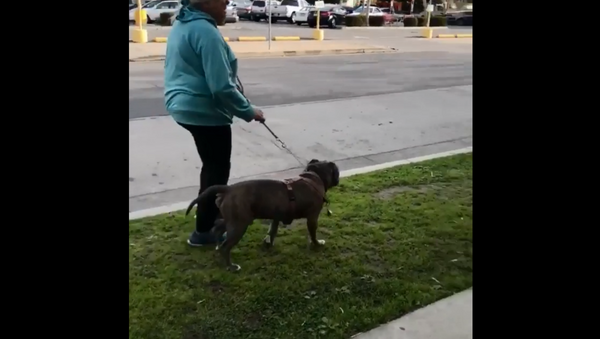 On Thursday, Jardiel Ochoa was managing the grounds outside of the North Hollywood school where works when a woman suddenly told him to "go back to Mexico" after he'd asked her to pick up after her dog.

Shocked by her response, Ochoa whipped out his phone to record the racist rant the woman had embarked upon. He later shared the video, captioned "Trump effect in full effect," on Instagram and Facebook.

​"You want me to go back to Mexico?" Ochoa is heard asking the woman as the recording begins. The unidentified woman replied by saying "I sure do."

According to this unidentified woman, Ochoa needed to go back over the Mexico border because she was tired of his "bossy attitude."

"Wow, just because I asked you to pick up after your dog, you tell me to go back to Mexico?" Ochoa asked. "Well, this is my property and I'm in charge."

What did this sweater-wearing woman respond with, you wonder?

"That isn't your property and you just think it's your property because you're Mexican," she claimed. "That's how Mexicans are… they think they own America, but we're sending them back."

After telling her that he's more American, Ochoa leaves the woman with the reminder, once again, to clean up after her dog.

Speaking to CBS Los Angeles, Ochoa told the outlet that the entire ordeal was "weird."

"It just feels weird because you never think it's going to happen to you," he said. "I think [the woman] should learn from it. We live in Los Angeles, so, you know, there's no reason to be racist."

This altercation comes just a week after a Long Beach woman told an Asian-American couple to go back to their home country. That woman was later put on administrative leave after her employer learned of her remarks.