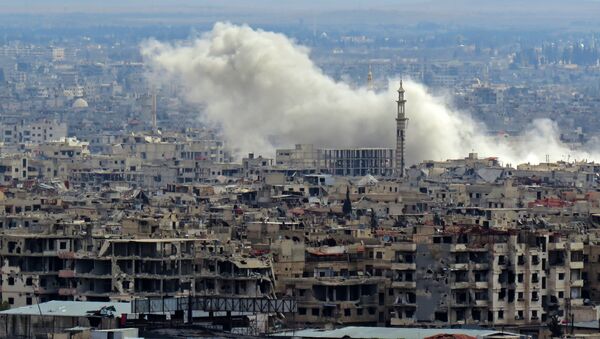 Syrian pro-government troops are preparing to conduct a siege of the towns of Douma and Mesraba, two terrorist strongholds in Eastern Ghouta, media reported, citing military and local sources.

According to the FARS news agency, referring to unnamed military sources, the Syrian Arab Army has managed to deploy near Douma, which is considered to be the Jeish al-Islam terrorist group’s center in the region. Meanwhile, other army units are reportedly advancing further to Mesraba from Beit Sawa, as the troops are expected to launch a large-scale attack on the two towns within several hours to amplify pressure on the remaining terrorists in the area.

READ MORE: E Ghouta Crisis: While Slamming Russia, US Fails to Notice Beam in Its Own Eye

On March 7, a Syrian army colonel told state TV that people in Eastern Ghouta would return to the “state’s embrace” very soon, while another Syrian commander told the SANA broadcaster that militants had mined roads in the area.

"We have received instructions from the army command to lift the siege of our people in Eastern Ghouta. God willing, very, very, very soon… they will return to the state's embrace," the colonel said in a broadcast near the town of Mesraba.

Earlier on the same day, Russian Foreign Ministry spokeswoman Maria Zakharova said that the Syrian army had launched an operation in the region to eliminate the civilian security threat in response to the daily bombardment of areas of central Damascus by terrorists in Eastern Ghouta.

"While self-proclaimed representatives from among the opposition, who are far from Eastern Ghouta, are making loud statements about the alleged readiness of the enclave's armed groups to comply with the provisions of [UNSC] Resolution 2401, the terrorists operating on the ground continue to disrupt daily humanitarian pauses, which were established on the initiative of Russia, and are strictly observed by the Syrian military," Zakharova stressed.

On February 24, the UN Security Council unanimously adopted Resolution 2401 which urges all belligerent parties to immediately stop all hostilities and adhere to a long-term humanitarian pause across Syria in order to ensure the safe and unhindered delivery of humanitarian aid, as well as medical evacuation of those injured. The ceasefire does not apply to ongoing military operations against Daesh* or other terrorist groups.

*also known as ISIS/ISIL/IS, a terrorist group banned in Russia