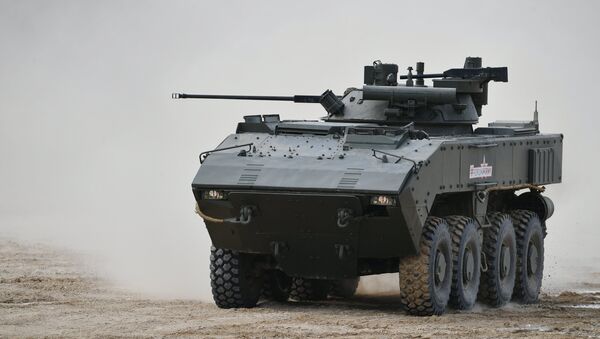 © Sputnik / Mikhail Voskresenskiy
/
Go to the photo bank
Subscribe
Russia is developing its first ever wheeled tank which could be ideal both for counterterrorism operations and conventional warfare. RIA Novosti military observer Andrei Kots took a closer look at the new fighting vehicle’s strong points compared to its tracked counterparts.

Wheeled tanks are a family of armored fighting vehicles equipped with a tank cannon installed in a fully-rotating turret. Even though less protected than their heavy tracked counterparts, wheeled tanks leave them far behind when it comes to speed, maneuverability and endurance.

Rolling Thunder: Russia Working on New Wheeled Tank Based on Bumerang APC
While a main battle tank breaks down after 10,000 kilometers, a wheeled tank will do so only after 100,000 kilometers. Great endurance, reliability and impressive firepower make it ideal for combat operations on the flanks, in reconnaissance missions, patrols and combat security operations, Viktor Murakhovsky, editor-in-chief of Russian defense magazine Arsenal of the Fatherland, said in an interview with Russian TV channel Zvezda.

Murakhovsky added that the new armored vehicle would likely be equipped with a 125mm smoothbore gun – the same as that used on the Sprut-SDM self-propelled tank destroyer. This, in Murakhovsky's view, would give Russia a "wheeled tank which has no equivalent in the world."

Wheeled tanks, such as the M1128 MGS Strykers, French AMX-10RC, Japanese MCVs and Italian Centauros, are currently in service in a number of NATO countries, and also in Asia.

In early 2010, the Russian Defense Ministry was in talks with Italy to buy a number of Centauro wheeled tanks. Several such units were brought to Russia for testing, but the Centauros proved less reliable than expected.

A wheeled tank is just one of a whole family of armored vehicles based on the Bumerang platform.

A Bumerang APC was unveiled to the public during the 2015 Victory Day parade in Moscow.

Plans are also apace to build an armored fighting vehicle, a reconnaissance vehicle and a number of other modifications based on the Bumerang armored platform.

According to the developers, the armored vehicles will have highway endurance of around 800 kilometers (500 miles) and a maximum speed of about 100 kilometers an hour (62 miles and hour).

The new vehicles will also be better protected than their wheeled predecessors with the Bumerangs featuring variable-armor thickness depending on a concrete mission.

The developers say that in the heaviest armor configuration, the Bumerang will be able to withstand a direct artillery hit.