E Ghouta Crisis: While Slamming Russia, US Fails to Notice Beam in Its Own Eye 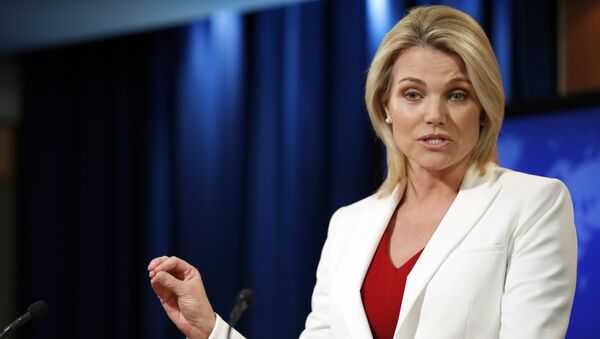 © AP Photo / Alex Brandon
Subscribe
The US State Department's narrative of Moscow and Damascus' failing to adhere to the provisions of UN Resolution 2401 clearly contradict facts on the ground. Meanwhile, it has turned out that the areas where the resolution remains largely neglected and people are not getting much needed humanitarian aid are those controlled by the US.

On March 6, the US State Department once again verbally attacked Russia and the Syrian government for what it called an attempt to "feign implementation of UN Security Council Resolution 2401" and the demonstration of "complete disregard for the ongoing humanitarian disaster that still unfolds."

'Brutal Airstrikes by Russia and the Syrian Gov't Continue'

"Brutal airstrikes by Russia and the regime continue, especially in Eastern Ghouta, despite the unanimous UN Security Council vote on February 24th to demand an immediate cessation of hostilities throughout Syria," State Department spokesperson Heather Nauert told a press briefing. "The strikes on Eastern Ghouta in recent days have demonstrated the farcical nature of Russia's proposed humanitarian corridor."

​However, while citing UN Resolution 2401, which calls for the implementation of a 30-day ceasefire across Syria, the State Department spokesperson somehow failed to mention that the document clarifies that the truce does not apply to military actions against Daesh (ISIS/ISIL), al-Qaeda, al-Nusra Front* and "and all other individuals, groups, undertakings and entities associated with al-Qaeda or ISIL, and other terrorist groups, as designated by the Security Council."

Russia Has Evidence West Trying to Save Nusra Front for Regime Change - Lavrov
In February, Syrian government forces kicked off an operation codenamed Damascus Steel to liberate Eastern Ghouta from terrorists formerly known as the al-Nusra Front organization, designated as terrorists by the UN Security Council.

The US State Department's attempts to pressure the Russo-Syrian coalition to stop its military operation against al-Nusra Front in the region raise questions, according to Russian Foreign Minister Sergei Lavrov.

"Our Western partners, especially the United States, would like to take the heat off al-Nusra Front, which has now changed its name — but this does not mean it has changed its nature —  and save it, in case they decide to return to plan 'B,' which is to change the regime in Damascus," Lavrov underscored.

Meanwhile, jihadists concentrated in Eastern Ghouta continue shelling Damascus in clear violation of the UNSC's Resolution 2401. Damascus has repeatedly stated that it opens fire in response to attacks from the suburb. 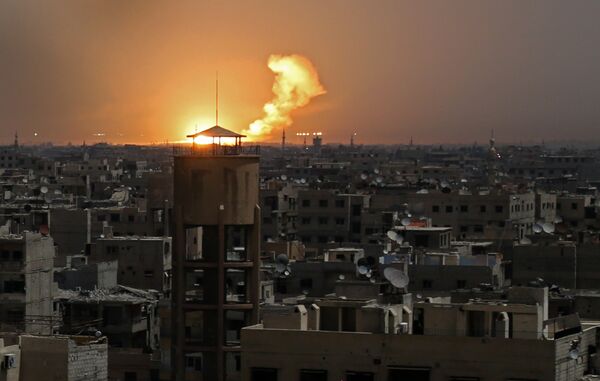 A picture taken on February 28, 2018 shows flames erupting in the horizon following a reported rocket attack in al-Shaffuniyah, in the enclave of Eastern Ghouta on the outskirts of the Syrian capital Damascus
© AFP 2022 / Ammar SULEIMAN

While Nauert claimed Tuesday that there has been no meaningful humanitarian pause implemented in the region, facts on the ground prove otherwise.

On February 27, a daily humanitarian pause from 9:00 a.m. to 2:00 p.m. local time (07:00-12:00 GMT) came into effect in Eastern Ghouta under the supervision of the Russo-Syrian coalition. A humanitarian corridor was opened between Damascus and its suburban area for civilians in the Wafedeen refugee camp.

However, continuous attacks from jihadist groups operating in Eastern Ghouta, such as Jaysh al-Islam, Ahrar al-Sham, Jabhat al-Nusra and the al-Rahman Legion still prevent civilians from leaving the combat area, using them as human shields.

According to the Russian center for Syrian reconciliation, there have been no records of any civilians leaving Eastern Ghouta during the eight humanitarian pauses so far.

To tackle the problem, on March 5 the Syrian Arab Army (SAA) opened a humanitarian corridor for militants who are allowed to leave the area together with their families, thus repeating the scenario previously implemented in Aleppo to reduce tensions and save human lives.

The US State Department's claim that Russia and Damascus "show complete disregard" to the humanitarian crisis in the area bears no relation to reality.

Russian Military: Al Nusra Terrorists Shelled Convoy in Eastern Ghouta
After the implementation of the five-hour daily humanitarian pauses, Damascus tried to send dozens of trucks with aid to Eastern Ghouta, but the attempts were thwarted by the continuing shelling of the humanitarian corridor by jihadist groups.

On March 5, the Russian Defense Ministry's Center for Syrian reconciliation reported that the al-Nusra terrorist organization had fired mortar shells at the humanitarian convoy that was on its way to the Syrian town of Douma in Eastern Ghouta.

The delivery of humanitarian aid and medicine to civilians was under threat of disruption due to the two-hour delay which was caused by prolonged talks between jihadists and convoy members. It was then reported that the convoy of 45 trucks delivered 247 tonnes of humanitarian aid to residents of Douma.

A diplomatic source told Sputnik that the Russo-Syrian coalition even halted the attacks on al-Nusra Front on March 5 to ensure the delivery of humanitarian aid to Douma.

Yesterday, the Russian Reconciliation Centre organized delivery of the UN humanitarian convoy with 247 tons of food supplies for civilians in the Eastern Ghouta. The convoy was ready to evacuate up to 1,000 civilians but managed to evacuate only 13 people, including 5 children

​Although the convoy was ready to evacuate up to 1,000 civilians from the area in accordance with a previous agreement with jihadists, who had promised to let civilians go in exchange for humanitarian aid, it managed to evacuate only 13 people, including 5 children. 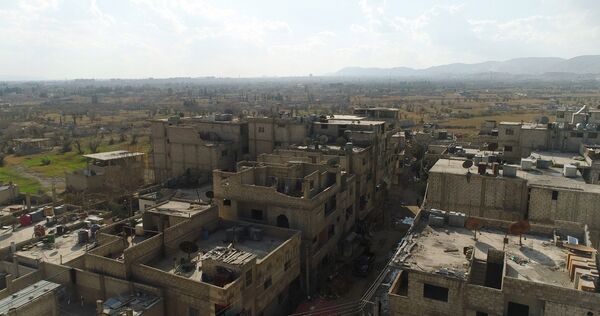 Commenting on the implementation of Resolution 2401, the Russian Ministry of Defense reported March 6 that the 30-day ceasefire regime in general is observed on the territory of Syria, with five convoys of the United Nations and the Syrian Arab Red Crescent being delivered to Syrians with 854 tons of humanitarian cargo.

The ministry highlighted that the only areas where the provisions of Resolution 2401 are being largely neglected are those controlled by the US: The people of Raqqa and the Rukban refugee camp are still being denied humanitarian aid despite the US-occupied At-Tanf being located in close proximity to the areas, the report outlined.

Obviously, provisions of the #UN Security Council Resolution 2401 are being neglected only in the areas controlled by the USA in #Syria, where people of bombed-out #Raqqa, the #Rukban refugee camp are denied humanitarian aid in vicinity of al-Tanf occupied by American troops

​"We urge the United States to fulfill its obligations under UNSC 2401, not to impede access to controlled areas for representatives of international humanitarian organizations and the UN to assess the severity of the humanitarian situation and take urgent measures to provide the necessary assistance to the civilian population," the statement read.

It appears that while lambasting Moscow and Damascus for alleged unwillingness to implement Resolution 2401, the US State Department has failed to remove the beam out of its own eye.