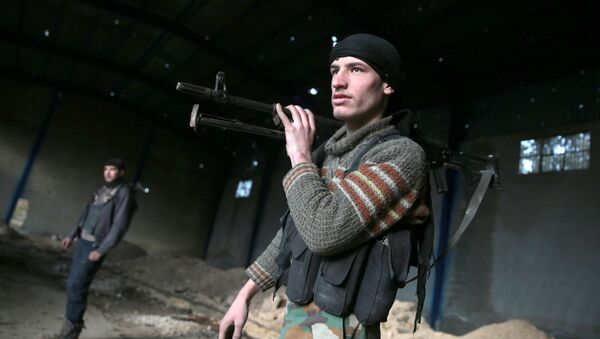 © REUTERS / Bassam Khabieh
Subscribe
The Syrian army is conducting an attack on the militants' defensive line in the village of Masraba in Eastern Ghouta in an effort to slice the rebel enclave in two as they intensified a campaign to deal the opposition its biggest defeat since 2016.

A Syrian army colonel told state TV on Wednesday that people in the rebel enclave of Eastern Ghouta would return to the "state's embrace" very soon.

"We have received instructions from the army command to lift the siege off our people in eastern Ghouta. God willing, very, very, very soon… they will return to the state's embrace," the colonel said in a broadcast near the town of Mesraba.

One of the Syrian commanders told the SANA broadcaster media that militants mined roads in the area.

Earlier in the day, Russian Foreign Ministry spokeswoman Maria Zakharova said that in response to the daily bombardment of Damascus central areas by terrorists in Eastern Ghouta, the Syrian army launched an operation in the area to eliminate the threat to the security of civilians.

"While self-proclaimed representatives from among the opposition, who are far from Eastern Ghouta, are making loud statements about the alleged readiness of the enclave's armed groups to comply with the provisions of [UNSC] resolution 2401, the terrorists operating on the ground continue to disrupt daily humanitarian pauses, which were established on the initiative of Russia, and are strictly observed by the Syrian military," Zakharova stressed.

Erdogan Slams UNSC Resolution for Failing to Work in Eastern Ghouta
On February 24, the UN Security Council unanimously adopted Resolution 2401 that urges all conflicting parties to immediately stop all hostilities and adhere to a long-term humanitarian pause across Syria in order to ensure the safe and unhindered delivery of humanitarian aid, as well as medical evacuation of those injured. The ceasefire does not apply to ongoing military operations against Daesh or al-Qaeda terrorist groups (both banned in Russia) and their affiliates.

Moreover, Russia proposed an initiative of arranging a five-hour daily humanitarian pause to secure humanitarian supplies and evacuations from the area. However, militants operating in Eastern Ghouta proceed to shell and prevent the humanitarian operations from being implemented.

Eastern Ghouta was seized by militants in 2012. According to Syrian Army estimates, there are 10,000-12,000 militants in the region. Despite the recent UN resolution, the fighting has not stopped, even when the humanitarian pause was in place, the Russian Defense Ministry's center for Syrian reconciliation said. As militants constantly target all exits from the enclave, civilians have been unable to leave the area, according to the center.