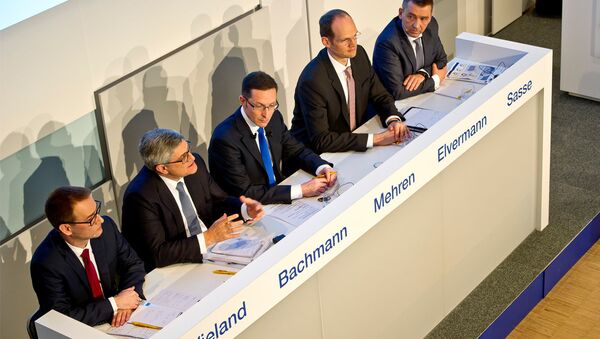 KASSEL (Germany) (Sputnik) - Moscow was Berlin's only foreign partner that provided Germany with additional natural gas during the cold period in early March, Mario Mehren, the CEO of the Wintershall energy company, said.

"Maybe you noticed that it was very cold in Europe last week, but maybe you have not noticed it, because the buildings were heated very well, and they were heated because of gas deliveries from Russia, particularly via the Nord Stream gas pipeline… If you look at flows at gas in these days, the Norwegians failed to increase the deliveries and the only partner that had responded [to the requests of Germany] was Russia," Mario Mehren, the CEO of the Wintershall energy company said at a press conference.

Mario Mehren: "Russia is, and will remain, Wintershall’s most important partner! As a company we know that successful economic cooperation helps to build bridges in political issues too. The best example of this is our cooperation with @GazpromEN." #APC2018

German company Wintershall expects that Denmark will give the green light to the construction of the Nord Stream 2 gas pipeline in its territorial waters, the company's CEO Mario Mehren said.

"We do not see Denmark opposing this pipeline project. We see that Denmark has started the process of obtaining a license and is working on this process. And an appropriate decision will be eventually taken on the basis of new legislation that took effect at the beginning of this year. I cannot imagine Denmark taking a decision that would harm EU consumers. I believe that there will be a positive decision on the Nord Stream 2," Mehren told a press conference.

In November, Denmark adopted a bill that enabled the country to prevent the construction of the Nord Stream 2 if the pipeline harmed Danish strategic or security interests. In early October, Sergey Serdyukov, the chief technical officer for Nord Stream 2 AG, said that the company had developed an alternative route for the pipeline in case of Denmark banning its construction in Danish territorial waters.

"By the end of the year, each company paid out 324 million euros… The mechanism entails that we all pay at one time," Mehren told reporters.

Mehren specified that the first tranche was allocated in June and the second in December.

Through Nord Stream AG, based in Zug, Switzerland, Wintershall holds a 15.5 percent share in the Nord Stream pipeline, which commenced operation in 2011. This pipeline, which runs from Russia through the Baltic Sea to the German coast, helps strengthen the security of supply in Europe with a total annual capacity of 55 billion cubic meters of natural gas. Also, Wintershall is contributing to the financing of the new Nord Stream 2 project as a co-creditor, according to Wintershall press release.

Russia's energy giant Gazprom reported at the end of February and in the beginning of March about record volumes of gas exports to Europe. On Friday, the Russian company said that it had broken yet another record for daily exports by delivering 713 million cubic meters of gas to the European Union.