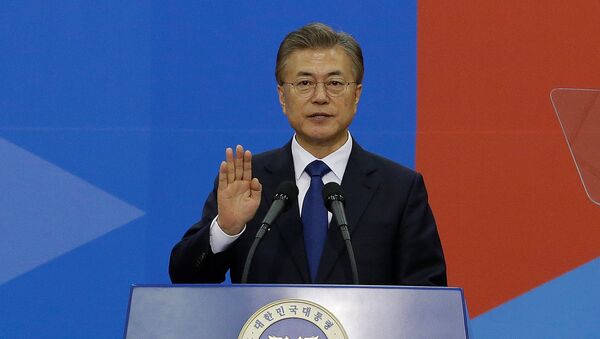 TOKYO (Sputnik) - South Korean President Moon Jae-in said Wednesday that he was not planning to ease sanctions against North Korea just to hold the third inter-Korean summit and establish a dialogue with Pyongyang.

“We are not planning to ease sanctions just to start the inter-Korean dialogue,” Moon said at the dinner, as quoted by the Yonhap news agency.

The president noted that South Korea had come to "a very critical juncture" in its efforts to reach peace and denuclearization on the Korean Peninsula, noting that it was still too early to pin hopes for the intra-Korean dialogue.

"But I believe it is still too early to be optimistic because we are only at the starting line," Moon said.

The South Korean leader noted that denuclearization was the final goal of the government, stressing that Seoul could not agree just on freezing Pyongyang’s nuclear program or nuclear non-proliferation.

"But given the fact that North Korea’s immediate disarmament could be difficult, I believe that we will have to make some steps until we reach the stage of disarmament," Moon said.

South Korean Foreign Minister Kang Kyung-wha, in his turn, said that the reduction of tensions on the Korean peninsula was taking place at a quicker pace than expected.

"From the start of the year, beginning with the New Year's address [of North Korean leader Kim Jong Un], their participation in the Olympics, the engagement around the Olympics was rather at a quick pace that anybody had expected," Kang said in an interview with the Channel NewsAsia broadcaster, aired on Wednesday.

The minister noted that the negotiations, held between the South Korean delegation and the North Korean side, were "good and productive."

The South Korean president hosted on Wednesday a dinner for the members of the government’s delegation, which returned from a two-day visit to North Korea.

Following the visit, South Korean envoy Chung Eui-yong said the two countries would hold a summit in late April and establish a "hotline," with the first phone conversation to take place before the beginning of the meeting.

The North Korean leadership, in its turn, reaffirmed the commitment of using neither nuclear nor conventional weapons against the South in exchange for security guarantees and the willingness start a dialogue with the US.