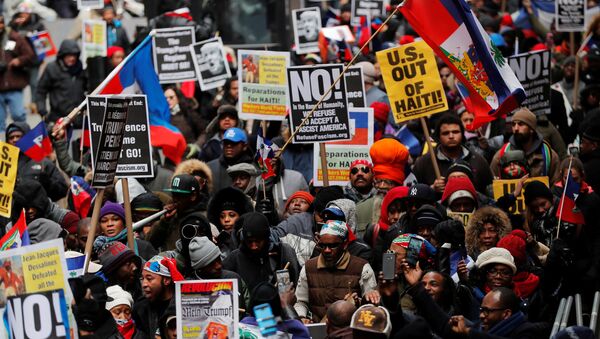 Haiti, one of the nations US President Donald Trump called a “shithole country” during a closed-door White House meeting on immigration in January, has hired a public relations firms to improve its image.

According to forms recently filed with the US Justice Department, global public relations firm Mercury is cooperating with Haiti to enhance its reputation in Washington.

By Any Means Necessary
Cuba and Haiti's Revolutionary Roots; Hatch to Retire in Utah

In its filing to the Justice Department, Mercury, which has a lobbying arm in Washington, wrote that it will oversee Haiti's "print, television, radio and digital media presence by crafting their narrative and amplifying their message… [and] placing stories, booking media appearances, preparing talking points/media advisories," the Daily Caller reported.

"It is expressly agreed and understood that the services under this contract shall not include any lobbying activities (national or local) whatsoever," the documents added.

"For them, this is image survival more than anything else during the Trump administration," said Fulton Armstrong, a senior faculty fellow at the Center for Latin American and Latino Studies at American University, the Daily Caller reported.

According to The Hill, the contract with Mercury names Haiti's ambassador to France as the client.

Although the total value of the contract is unclear, the US subcontract amounts to $10,000 for work completed from February 15 until the end of December, which is low in comparison to what companies are usually awarded for representing foreign government or political parties, according to The Hill. The Justice Department disclosures reveal there are three people working on the Haiti account. Mercury also had other foreign clients, including the Mexican state of Sinaloa and Qatar.

Over the past year, Trump has made multiple derogatory comments about regions in the Third World, including Haiti and countries in Africa.

Trump berated immigrants from Haiti, alleging that they all "have AIDS," and claimed Nigerians couldn't be relied on to "go back to their huts" after seeing America, according to a New York Times report from December 2017. The White House denied reports that Trump made the disparaging remarks at the time.

Last month, during an immigration meeting with lawmakers, the president asked why immigrants from "shithole countries" like Haiti, El Salvador and a few African countries, are allowed to enter the US.

"Why do we need more Haitians?" Trump said, sources told the Washington Post at the time. "Take them out."

Trump denied the comments on Twitter, stating that he had "never said anything derogatory about Haitians other than Haiti is, obviously, a very poor and troubled country."

"I have a wonderful relationship with Haitians," he added.