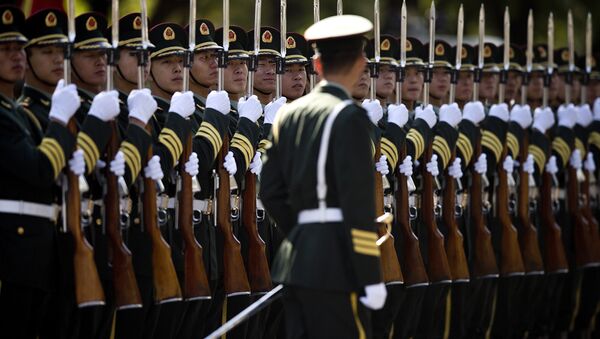 The Chinese government recently announced a near 10% increase in their military budget for 2018. Chinese state media have defended the decision, saying it is part of a modernization program, calling the increase "proportionate and low."

The increase is the biggest jump in Chinese military spending in recent years. In 2014, the total was $132 billion, which grew to $145 billion in 2015, $147 billion in 2016 and will reach $175 billion next year. Zhang Yesui, a spokesperson for the first annual session of the 13th NPC, explained that the extra money is not to increase China's overall military capacity, but to update and modernize their armed forces:

"A large part of the growth of the defense budget is to make up for the low military spending in the past and is mainly used to upgrade equipment and improve the welfare of servicemen and women and the living and training conditions of grassroots troops."

Sputnik spoke to political analyst Pearse Redmond about the geopolitical struggles that are the underlying reasons for China's consistently growing military expenditure:

"As China becomes more and more integrated in the global economy it understands that maintaining economic superiority requires more security. In Africa, where China has poured vast sums of money into various projects, they have also been quietly building small military bases and developing relationships with various African military and security forces. For example, in Djibouti, once the exclusive military domain of the US, China now operates a naval base adjacent to the Port of Doraleh, which is west of Djibouti City."

China’s Defense Budget Increase Consistent With Economic Growth Rate - Analysts
According to Redmond, another issue for China is the failure of US foreign policy to produce a more secure international environment. He commented:

"China is also cognizant of the waning influence of the United States. China views their inability to contain groups such as al-Qaeda and ISIS [Daesh* in Arabic] as a major problem, and as such have increased military spending for fear of these groups targeting Chinese interests at home and abroad."

Redmond identified "two major geopolitical pressures" motivating the increased budget — the increasingly hostile war of words between the US and North Korea, and the disintegrating security situation in Northern Afghanistan, saying:

"While President Trump congratulates himself for defeating ISIS in Syria and Iraq, the group has found new life in Northern Afghanistan. Over the past two years, ISIS has mounted deadly attacks throughout the region."

This is of particular concern for China because the local instability could become regional, with the Wakhan corridor a potential avenue for Daesh to project their violence and ideology into China. Redmond noted:

"This has long worried China, which shares a small border with Afghanistan's Badakshan Province. China fears that fighters may use the Wakhan Corridor to enter into Xinjiang. As more Uighur and Central Asian ISIS recruits flee from Syria, China is increasingly fearful that they will use Wakhan as a means of attacking China directly."

North Korea: A Problem for both China and the US?

Pence: US Won’t Change Its N Korea Policy Despite Pyongyang’s Openness to Talks
Meanwhile, the prospect of US military action against North Korea is another motive Redmond identified for the Chinese military's modernization efforts:

"North Korea may even pose a bigger threat for China and explain their increased military build up. The increasingly insane rhetoric from the US over the threat of a nuclear North Korea has once again dragged China into the possibility of serious military conflict."

In the event that the US invades or otherwise conducts military strikes against North Korea, this would inevitably produce a large-scale flow of Korean refugees into China. This problem, along with the post-war potential for a unified, US-friendly Korean nation, means that the Chinese government would have little choice but to intervene. Redmond explained:

"If Kim Jong Un's government were to be toppled, China would never accept Korea becoming unified and made into an even larger US military colony right on its border. Thus the threat of fighting US ground troops for the first time in decades becomes even more of a possibility. China would most likely look to prop up the North Korean government and become heavily involved in what happens afterwards."

That is true. But there is still the law of large numbers:

We are no longer the sole superpower.

​How Will America Respond?

The US response to China's increased military budget may be crucial. The commander of the US Navy's Pacific Fleet expressed concern about the lack of clarity and transparency regarding where the money will be spent, and why. Admiral Scott Swift said that China's "intent is not clearly understood," adding, "These investments and commitment need to be taken with full transparency."

Redmond suggests that while an overt military confrontation between the US and China is unlikely outside of North Korea, there are other battlegrounds for the two superpowers to work out their differences. In line with President Trump's recent comments, Redmond suggested the US might respond to China's accelerating military spending through "economic warfare":

"We have already seen Trump's desire for economic warfare with China become more of a reality. We could see high tariffs being placed on Chinese goods and there is the possibility of economic sanctions being placed on particular Chinese officials."

There are other means, both overt and covert, by which the US could push back against greater Chinese military ambitions. Redmond observed:

"The US may also continue its practice of sabotaging Chinese negotiations in Afghanistan. China has used its special relationship with Pakistan to attempt to bring the Taliban to the negotiating table only to see the US and Afghan intelligence hinder these attempts. The CIA, who have long-standing ties with jihadi factions like ETIM, could also make trouble for China. Larger scale attacks and bombings within China could very well happen."

US Carrier Docks in Danang: 'Vietnam Showing China That it Has Allies' – Analyst
One seemingly unavoidable result of China's decision is the US responding in kind, continuing to grow their own military expenditure in response to China improving the capabilities of their armed forces. Redmond concluded:

"Of course the US will use this as yet another excuse to increase their massively bloated budget. Congress has been all too eager to please the Military and Intelligence establishment by going above and beyond what even they ask for in terms of money. The possibility of an arms race with China is by no means out of the question."

The views and opinions expressed by Pearse Redmond are those of the speaker and do not necessarily reflect those of Sputnik.