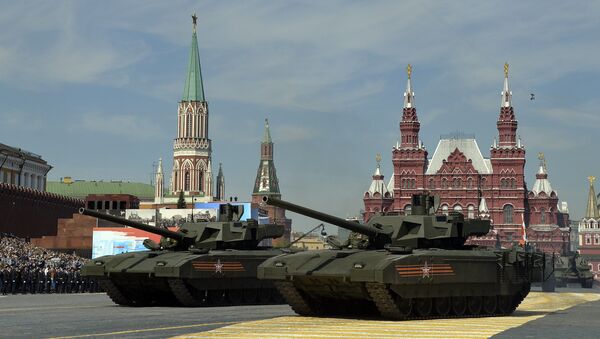 Col. Gen. Salyukov said that because the T-14 is a completely new design bristling with innovations, the manufacturers have been working according to plan to bring it up to speed and fine-tune its onboard systems.

“The T-14 Armata uses an innovative arrangement with an armored capsule for the crew, ammunition and fuel, and remote-controlled fire control system. This notably improves the tank’s survivability on the battlefield,” Salyukov said.

He added that the Armata’s protective gear was designed to make it stealthy, hard to lock-on by precision weapons with its active protection system ensuring timely detection and destruction of incoming munitions.

German Media Admits Russia's T-14 Armata Tank is Breakthrough in Military Field
“Even if hit, the tank’s explosive reactive armor ensures a high degree of protection against all existing anti-tank weapons,” the General noted, adding that the new-generation Armata will leave behind almost all-mass-produced Russian and the best foreign counterparts.

The T-14 boasts cutting-edge onboard gear with each crew member assigned a video camera and a touchpad to ensure all-round vision.

000000
Popular comments
I like how Russia is lately using words like "Indestructible" and "Invincible" to describe its hardware. The T-14 is likely the best tank currently in production in the world, but nothing is "Indestructible" or "Invincible". It is likely less susceptible than the T-72 to man-portable anti-tank missiles like the BGM-71 TOW. However, it's doubtful the T-14 would hold up well to a 2,000 pound Mark 84 JDAM. During the Gulf War, U.S. pilots nicknamed the Mark 84 "The Hammer" because dropping one on a tank was like hitting a matchbox car with a sledge hammer.
Cooler Heads
7 March 2018, 18:05 GMT3
000000
Imagine how much more lethan and less expensive if they could make it remotely controlled, no more having to protect crews.