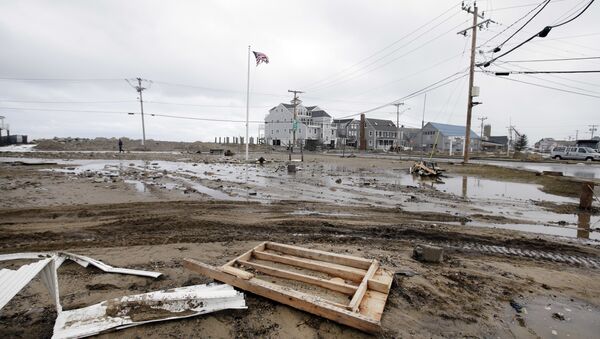 Thousands of flights have been cancelled at New Jersey, New York and Philadelphia airports as the northeastern US weathers yet another powerful winter storm Wednesday and Thursday.

Airlines have canceled more than 2,100 flights scheduled to depart Wednesday from airports in the Boston, Philadelphia and New York areas as Winter Storm Quinn is bring high winds and heavy snow to the region.

Another 200 flights have also been grounded for Thursday, according to flight-tracking service FlightAware.com. Airlines including United, Delta, JetBlue and American have waived fees for travelers impacted by the storms.

​According to the Federal Aviation Administration, delays in major Northeast airports were 15 minutes or less as of Wednesday morning, but conditions are expected to worsen.

​Pennsylvania Governor Tom Wolf also urged people to stay off the roads on Wednesday as the nor'easter moves across his state and noted that the National Guard has been activated.

"We know the storm has shifted east and that's a good thing for many people in Pennsylvania, but it's still going to have a significant impact on the eastern third of our state. This is a powerful storm and conditions can change quickly," Wolf said at a Wednesday news conference.

Winter advisories for lighter snow were issued in Baltimore, Providence and areas in upstate New York including Binghamton, Utica and Watertown.

Last week, Winter Storm Riley left more than 1.6 million homes and businesses without electricity. Thousands of flights were cancelled because of the storm and the state of Virginia declared a state of emergency. As Riley hammered the mid-Atlantic Friday morning, US federal offices were closed for the day in Washington, DC, and more than a million customers lost electricity in the region as a result of the storm.

Winter Storm Quinn, whose snow and wind is expected to intensify today and lead to widespread power outages and tree damage, comes only a few days after another nor'easter knocked out power to more than 2 million people in the region.

Now, once again, more than 50 million people from Philadelphia to Boston are under storm warnings and watches.