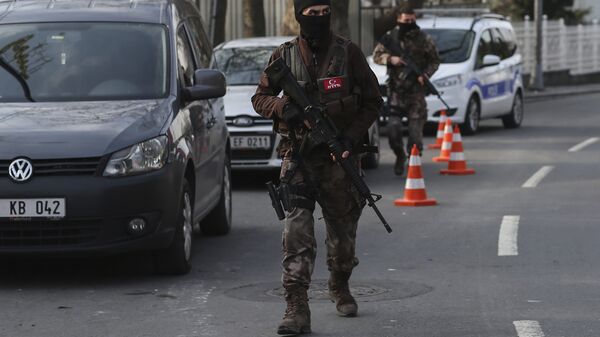 MOSCOW (Sputnik) - Turkish Deputy Prime Minister Bekir Bozdag has said that the country has detained over 4,000 militants of the Islamic State terrorist group (Daesh) between 2011 and 2018, including more than 1,850 non-Turkish nationals, local media reported Monday.

Bozdag also said that more than 12,500 people, including 5,654 foreigners, were detained during that period on suspicion of having ties to Daesh, the Daily Sabah newspaper reported.

According to the minister, the Turkish military killed 3,000 Daesh terrorists in Operation Euphrates Shield in Syria and 1,000 others near the Turkish camp in Iraq's Bashiqa.

In recent years, Turkey has been hit by numerous terror acts involving both Kurdish and Islamist militant groups, particularly Daesh. In response, Turkish security forces have conducted counterterrorism operations on a regular basis in different parts of the country.

Pentagon: Battle Against Daesh in Syria May Take Longer Amid SDF Redeployment
Turkish troops, in cooperation with opposition groups loyal to Ankara, have also participated in a number of military operations in Syria, mostly against Kurdish militants, such as the ongoing Operation Olive Branch in Afrin and the Operation Euphrates Shield from August 2016 to March 2017. Damascus has condemned the Turkish military operations, saying they violate Syrian sovereignty.

In December 2015, Turkish troops were deployed at Bashiqa camp, located about 19 miles northeast of Mosul, under the pretext of helping the Iraqi militia fight Daesh. The Iraqi government did not consent to the move, and Iraqi officials have repeatedly denounced the presence of the Turkish military as a hostile action that violates Iraq's sovereignty.